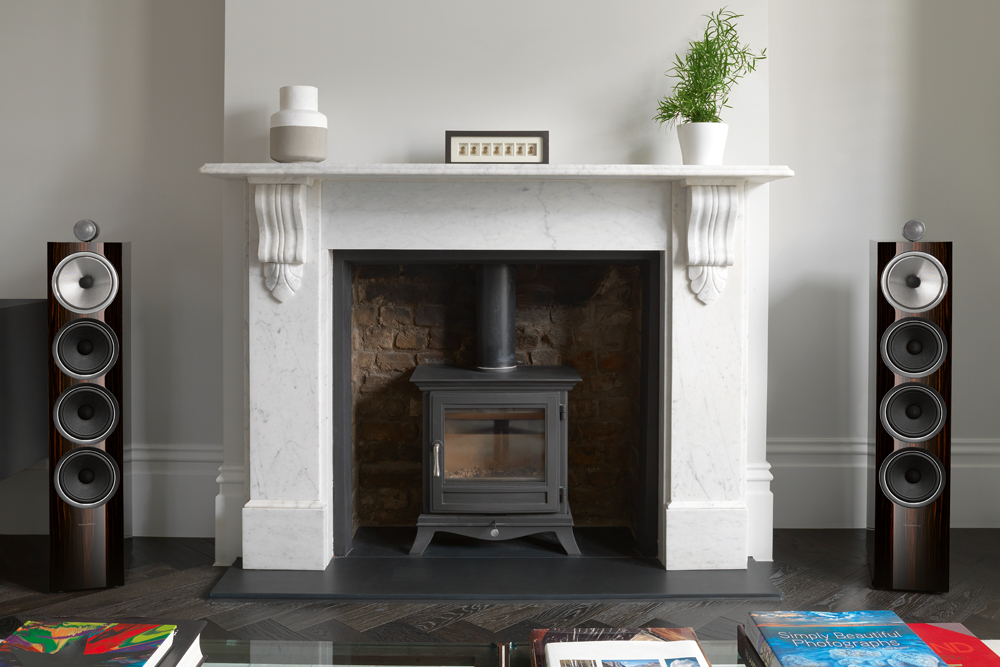 Like many advanced undertakings, high-end audio presents the opportunity to develop technologies, to progress the engineering of advanced materials and composites and to adopt fabrication methodologies expressing to fruition the imagination of the industry’s creative minds. These advances are, usually, firstly showcased in statement products. In 2017, Bowers & Wilkins launched its 700 S2 series of loudspeakers with new and also trickled down technologies first expressed in the company’s flagship 800 series. The new line was greeted with tremendous market success. Now in 2020, Bowers & Wilkins fine-tunes a key model, the 702 S2 (read our review here), with a tweaked crossover and a jaw-dropping new finish warranting a more illustrious moniker – the 702 Signature Edition.

This writer recalls the pure desirability and beauty of the Silver Signature standmount. I lusted over that superbly finished 2-way with all of the company’s technologies – given the silver treatment and a gorgeous finish – in the one package. Back in 1991, the Silver Signature commemorated Bowers & Wilkins’ 25th Anniversary… man how time flies. More recently, the 805 Maserati Edition and subsequent 805 D3 Prestige Edition (review here) incited near-equal stirrings… So there’s an established precedent for special versions of key high-end products at Bowers & Wilkins, acting as both a temptation for existing customers and as powerful enticement for new ones. Possibly, the special editions could also signal the impending end-of-line in the not too distant horizon. But hey, owning something that is either limited or distinctive is, well… special.

Given the success of the 702 S2 (still our most popular review), the still relevant technologies and its firm position within the market at the price point, Bowers & Wilkins in its wisdom saw it fit to honour the series with a special version applied to that model and the 705 S2 standmount (also reviewed here). However, the company’s engineers took the opportunity to revise a number of key areas with subtle enhancements which could potentially boost performance.

So, let’s get the obvious out of the way first. The finish. Gorgeous. Perfection. It’s that simple to express the splendour of the ‘Datuk Gloss’ finish chosen by Bowers & Wilkins for these 700 series Signature Edition models. Not only is the heavy-grained beauty of the wood veneer arresting but it’s further enhanced by the lacquer’s meticulous application. It’ an immaculate, deep patina meaning you won’t see a wave – let alone orange peel – on any of the 702 Signature Edition’s panels no matter how, or what angle, you examine them from. Flawless.

No matter the physical beauty of a loudspeaker, if the performance is lacking then it’s all for naught. Mind you, as far as sonic prowess, the platform the 702 S2 provides is a damn fine one. But how to wring a little more… how to squeeze that last ounce of potential from those magnificent drivers… 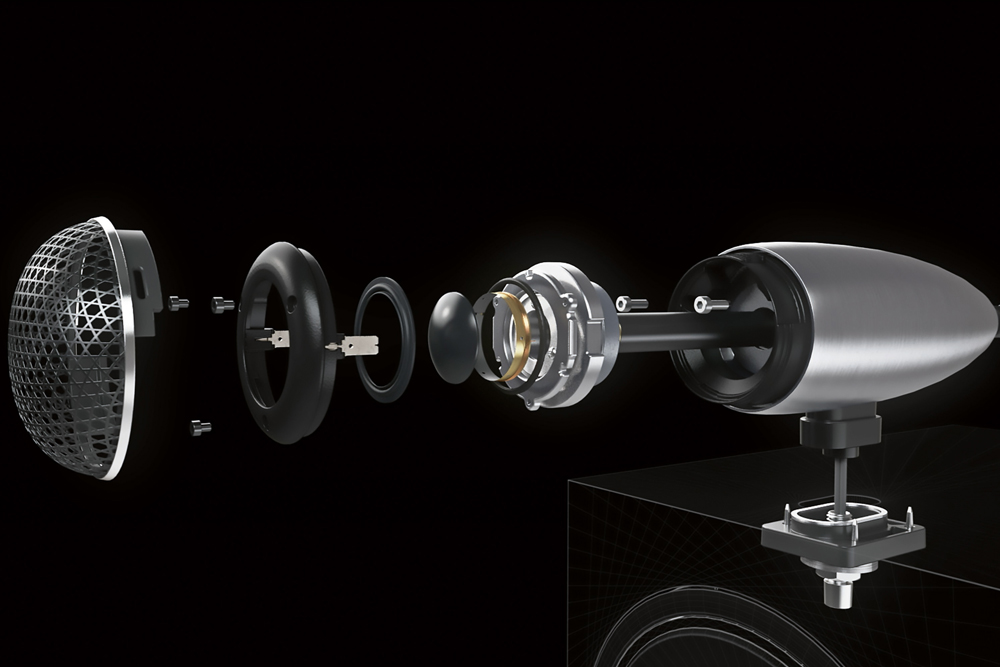 OK, let’s first examine those drivers and then I’ll talk about what Bowers & Wilkins’ engineers went about tweaking with a view to increase performance. I’ll start with the tweeter, Bowers & Wilkins’ relatively new 25mm carbon/aluminium sandwich dome which was in fact introduced for the 700 S2 series. It’s lightweight yet extremely rigid making for an appropriate ratio of mass to strength leading to B&W quoting a first break-up mode up in the highs at 47kHz, way out of harm’s way. The tweeter is housed in B&W’s signature bullet-shaped milled aluminium enclosure mounted atop the main enclosure proper, a la 800 series.

The Continuum driver is, umm… continued in the Signature Edition. The 160mm driver features the exclusive-to-B&W Continuum woven diaphragm material which is directly coupled to the driver’s frame eschewing a traditional roll surround. The coupling between cone and frame consists of a polymer gasket said to provide very linear excursion behaviour resulting in reduced diaphragm flexing, driving break-up modes well out of the band. The termination method is also said to provide extremely controlled and fast reaction time translating to sharp transient response. The Continuum driver is decoupled from the 702 Signature Edition’s front baffle via a rubber mount which isolates both driver and enclosure from vibrational distortions. 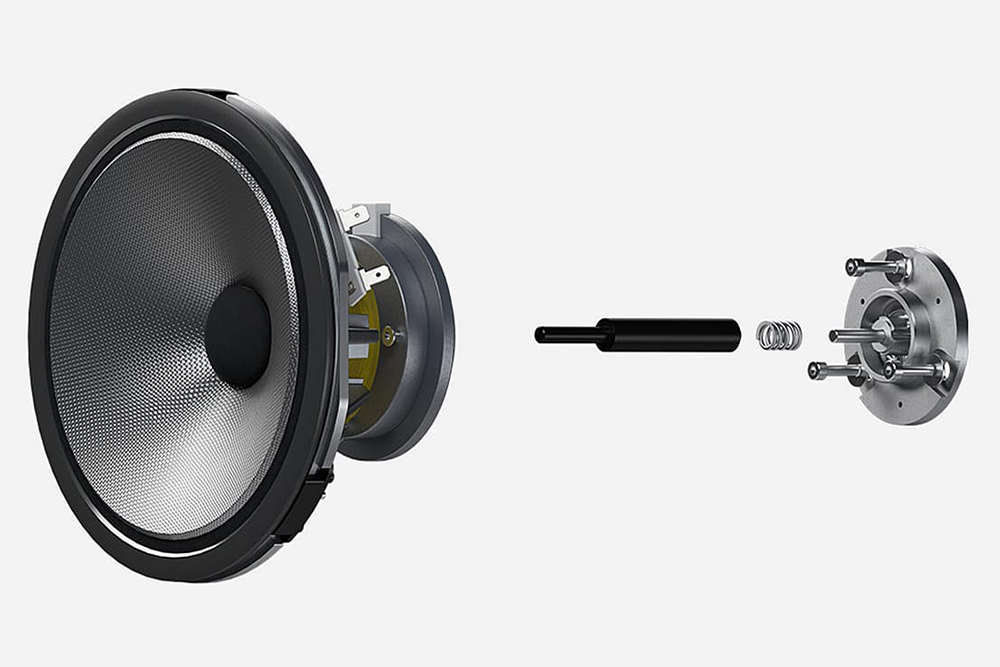 Finally, the low-end is provided by a trio of 165mm drivers. Here, Bowers & Wilkins uses varied thickness Aerofoil, a lightweight yet stiff material the company has adopted across upper-tier models for a number of generations in an assortment of versions. Bass frequencies are augmented by a flared dimpled reflex port, or ‘Flowport’ in Bowers & Wilkins-speak, designed to reduce air turbulence (chuffing noise).

The 702 Signature Edition displays exactly the same specifications as the 702 S2 upon which it is based on. So, all-round respectable numbers for frequency response at 45Hz to 28kHz +/- 3dB and extending to 28Hz and 33kHz when measured down to -6dB. Impedance is said to be 8 ohms nominal with a minimum of 3.1 ohms while sensitivity is quoted as 90dB (2.83Vrms at 1m). The 702 SE can take lots of clean power with a rating of 300 watts maximum.

As many loudspeaker designers have confirmed with me, capacitor changes with the most subtle of value variations can make a substantial impact on the sound quality of a design. In my opinion, the upgraded capacitors in tandem with the other fine-tuning strategies engineered into the 702 Signature Edition have certainly achieved a worthwhile performance lift. Read on.

As mentioned above, I reviewed the 702 S2 back in late 2017. I found it an excellent option for those not able to jump to Bowers & Wilkins’ renowned 800 flagship series. There were much of the flavours of the 800 line but with an understandable reduction in scale, dynamics and bass power given the price difference and technology simplifications (particularly in the tweeter and enclosure design). The 702 Signature Edition makes a not-so-subtle leap forward in its approximation to the performance offered by its upper echelon brethren.

Yes, the changes to the crossover have wrung noticeable improvements in three key areas, listed here in order of the improvement’s magnitude – midrange smoothness, bass articulation and overall dynamics.

Let’s start with midrange smoothness. While there was no etch or inherent brightness in the 702 S2 to start with, the 702 Signature Edition ups the ante with added fluidity, body and tonal textures. It’s a listen that seems more at ease while not sacrificing detail, resolution or instrument separation. It’s most noticeable around the lower mids, where the smoothness and sweetness of the band has been evidently increased. The 702 SE (for short) is a revealing speaker nonetheless, so it showed clear differences between amplifiers I had in-house at audition time. Like any good speaker, appropriately-matched electronics are a must. Powerhouse Class-A/B monoblocks exhibited control, resolution and dynamics while my own reference Gryphon Antileon EVO Class-A was shown for its textured timbrel beauty, treble delicacy and super-powerful bass. 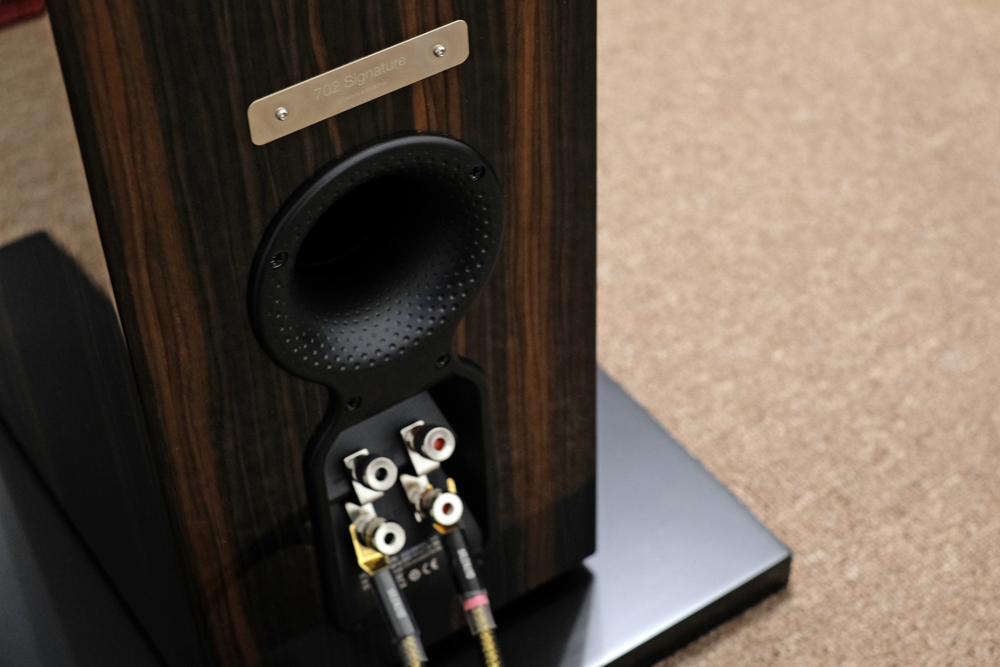 I loved vocals via the 702 SE. Mazzy Star’s “Fade Into You” from the So Tonight That I Might See FLAC file – streamed via the superb 432EVO High-End music player (review here) – had singer Hope Sandoval cutting through the heavy-laden atmosphere with clarity and detail while preserving the ambience and heavy reverb the recording is known for. It’s a mix of accuracy and sheer beauty. As the guitar weeps its subtle wail, it never obscures Sandoval… all is perfectly separated and individualised, yet forming a musical whole. There’s ample incision and projection to the mids and highs. Vocals cut through no matter the instrumental density of the recording.

The truthfulness and sheer listenability, that new-found sweetness to the midrange, makes for great male vocals too. On “I Can’t Quit You Babe” from Bjorn Berge’s Mad Fingers Ball Tidal CD quality stream, his gravel-like hoarseness comes through most enjoyably without the inaccuracies of chestiness or thickness through the lower reaches of the male vocal range. It’s a clean and clear performance that adds to the track’s heavy anxiousness. There’s superb expression to the acoustic guitar too, highlighted by sharp transients, oodles of detail and excellent reverberance reproduction.

Bass articulation, the second attribute I mention above is easily identified. Yes, admittedly, my review of the 702 S2 took place within a different acoustic space. However, my memory of the low-end frequencies was that they featured power and depth with excellent drive in the kick drum area particularly (all confirmed via my extensive notes from that period). The Signatures do this just as well but with even tighter, more nuanced control. “Come Together” from Brian Bromberg’s Wood album had added detail and snappiness via the 702 SEs, a more elevated sense of rhythmic flow. When the acoustic bass strings get snapped, you hear it clearly, as the transient cuts over and above the preceding note and also the one that follows. Overall the low-end has been improved to elevate the speakers to a level over and above the standard model – as good as those speakers are.

The drum intro on “You Bring Out The Savage In Me” from Cécile McLorin Salvant’s Woman Child via Tidal is controlled, tight and detailed with excellent tone truthfulness. It all punches through powerfully (you kind’a feel it), then Salvant’s voice soars above the mayhem with clarity and locked-in front-and-centre. 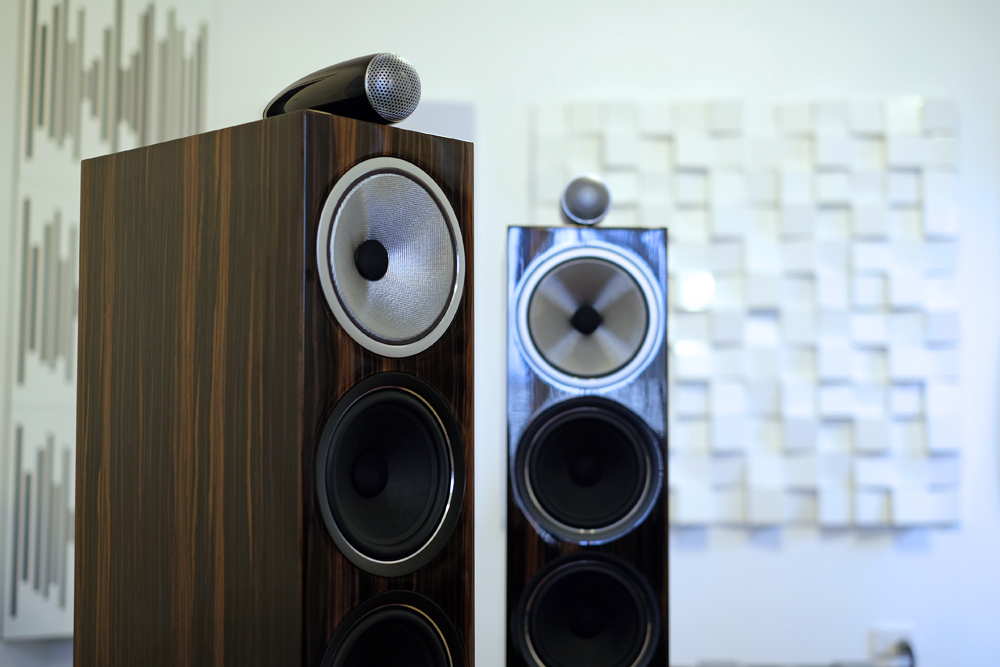 To that third improved aspect. Overall dynamics. While being the most understated among the three facets (in other words the closest to the standard version), the new crossover has provided a subtle augmentation in expressiveness across the dynamic range, frequency wide. There are very few recordings that can compete with the dynamism of the Gladiator soundtrack. A more than obvious homage to Holst’s The Planets, the Hans Zimmer composition slams hard. If your speakers (or system) are not able to track the dynamic swings, and even more crucial, they lack the resolving powers needed to delineate the instrumental lines, then you’re left with a compressed and congested mess. No problems here. The 702 SEs are more than capable of delivering a powerfully credible presentation. Well done there too Bowers & Wilkins engineers.

Ditto for Tony Dagradi’s Live At The Columns CD and FLAC file where the track “Limbo Jazz” is genuinely explosive. There is concussive power and dynamics in the bass solo and when the drums come in… well, you and your system better be prepared. This recording was produced without any form of compression. And it shows. It’s quite possibly the closest credible approach a recording’s come to in-the-room bass and drums. The 702 Signature Edition does not limit this, within the realms of its physical design. Yes, the trio of Aerofoil woofers kick butt. Only larger systems – and also much more expensive ones – will surpass the 702 SE’s dynamic expression with this recording but, at its stature and price point, the SEs share the top-of-the-class.

So you’re looking at an upper echelon Bowers & Wilkins speaker. However, you’re undecided as to whether you should fork-out for a lower-wrung 800 series model or aim at the top of the 700 series. The latter option spotlights the 702 S2, an excellent speaker in its own right. But now you have a further choice.

The additional hard-earned for the 702 Signature Edition does not just offer you a far more beautiful finish. As arresting as that luxurious aesthetic is – to many, that alone would be worth the extra cash – the re-engineered crossover, with its superior components, also presents some worthy performance gains. 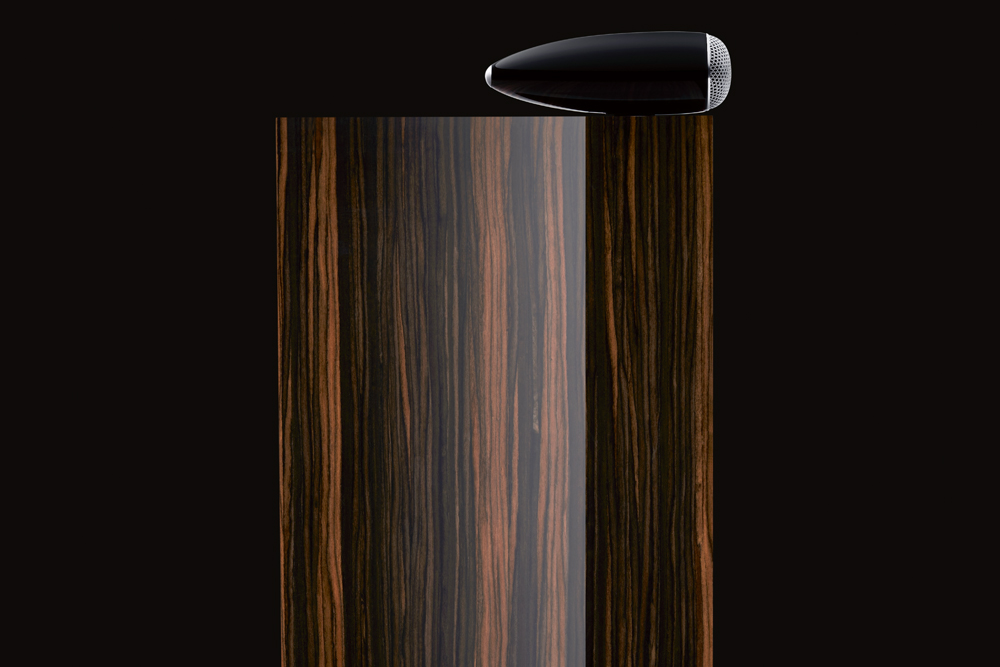 So from whichever angle you look at it, the 702 Signature Edition is an excellent performer. The three degustation portions of midrange smoothness, bass articulation and dynamics served-up by the 702 Signature Edition are accentuations of the fulsome umami inherent in the S2 version. The Signature Edition version enriches a strong base of flavours to bring out the full capabilities of the design. A dash of spice, a sprinkle of zest in the crossover. An added personal touch of flair by a skilled, committed team of engineers. And then, there’s that Datuk Gloss finish… Yes, the 702 Signature Edition, with its platter of enhanced ingredients, makes for a deliciously satisfying dish.