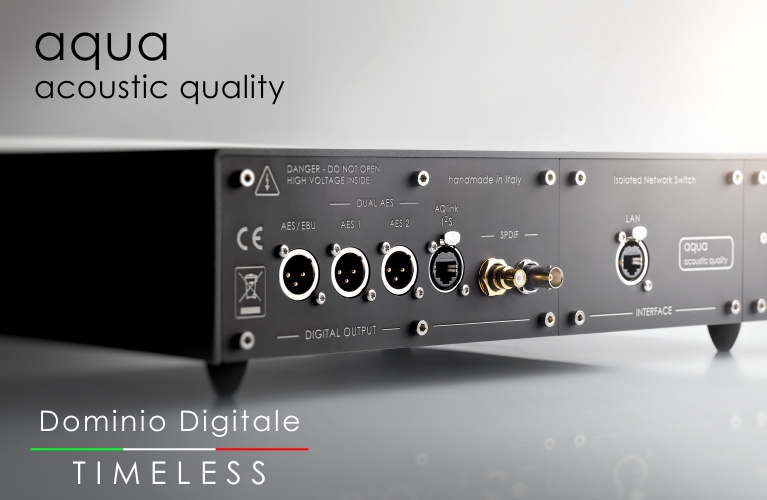 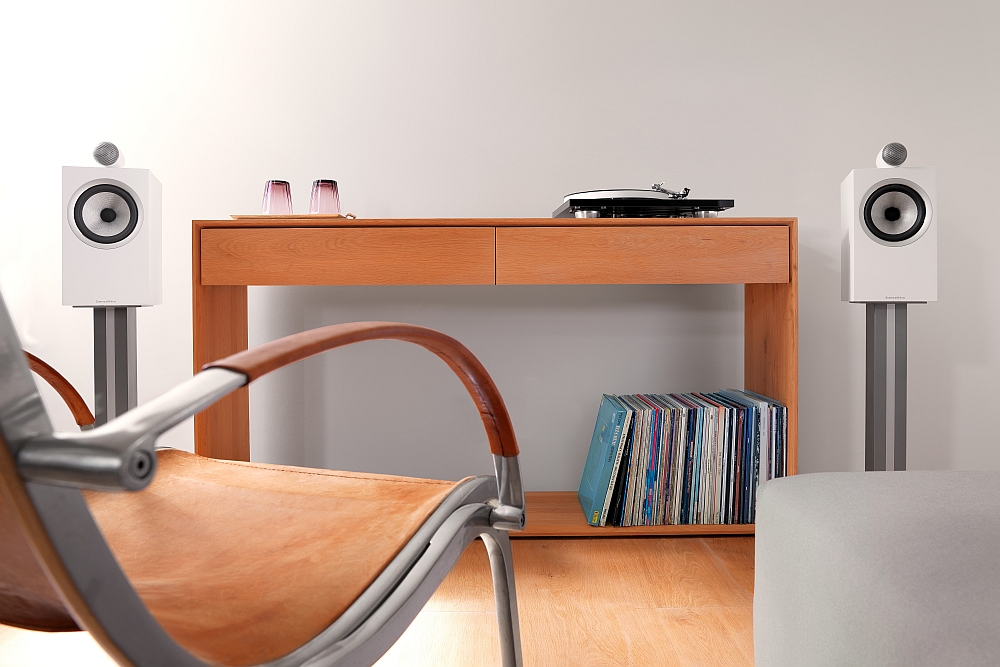 Bowers and Wilkins. Yes, B&W... A name familiar to almost every audiophile that ever obsessed over their bits, bytes or tonearm balance. From the almighty Nautilus, an absolute landmark of a speaker, the DM6 and its unusual shape, the mighty 801 and 808 which are coveted, collected and admired to this day.

If ever a company had earned the right to rest on its laurels and just keep on pumping out the same designs and models they've got down pat, it would have to be B&W.

But the company just doesn’t rest. Its line-up is evolving, improving and always innovating. Not all designs suit everyone's taste, or budget, but if you're looking for high-end speakers, B&W should most definitely be on your audition list. Some listeners (and studios including Abbey Road Studios) never look any further than the B&W catalogue for their next Audio "fix", preferring to trust in the same manufacturer that's looked after them for so many decades.

This reviewer has enjoyed several offerings from the house of Messrs Bowers & Wilkins over the years. The monster B&W 808 came and went, as did smaller models like the DM7 and the little DM4 from 1972. All featured excellent construction and a consistently better-than-average sound quality. Some, like the DM7, paved the way for the signature external tweeter, now featured prominently on the higher-end models. Catering for today's modern tech world, B&W also venture into wireless speakers, headphones and automotive sound systems.

Which brings me to the speakers on review here, the B&W 705 S2. Diminutive? Yes, they're small-(ish) bookshelf sized speakers. Do they behave like bookshelf speakers? Not even close! But more on that later…

Appearance wise, these are a pretty speaker to behold. There's very little to dislike upon first inspection and much to admire. The prominent new 25mm Carbon Dome Tweeter stands proud on top of the cabinet, encased in a "torpedo shaped" housing, milled from a solid block of aluminium, mounted softly, decoupled from the cabinet and acoustically inert as a result. Running all the way up to an amazing 47Khz, it is an important part of the overall sound character to be found here. 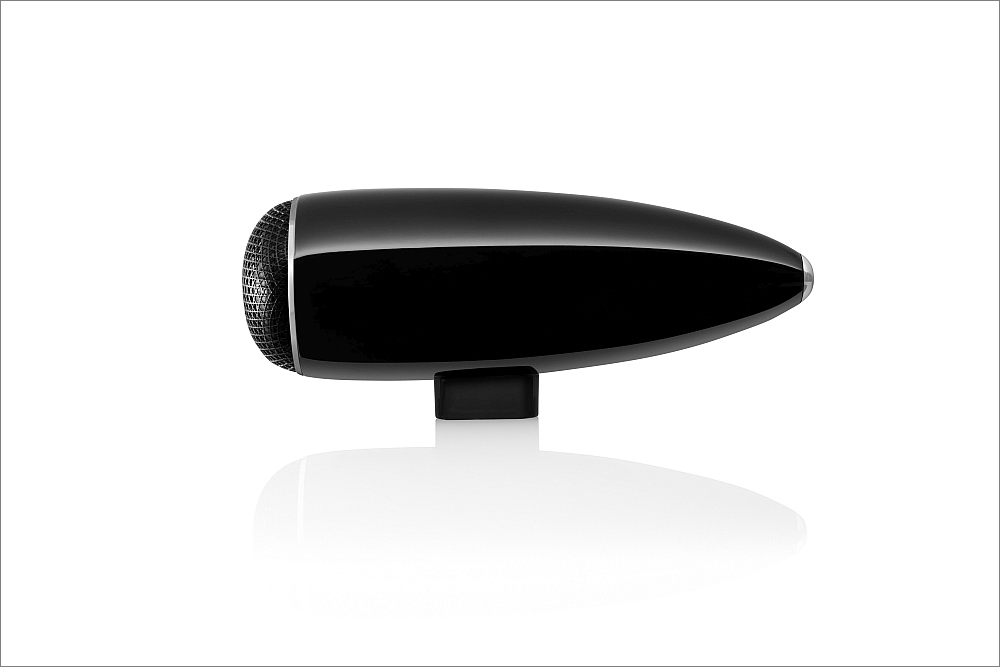 The real wood veneer on this pair is in the “Rosenut” finish and showed off the beautiful grain and lustre, plus the cabinet itself easily passes the all-important "knuckle" test; it's solid alright! Around the back, highly polished silver plated twin speaker terminals are recessed into a black alloy housing, incorporating a dimpled and smoothed rear port design. Speaker terminal bridging connectors are included, should you prefer single speaker wire connection (I do). The 705S2 are not overly heavy, weighing in at 9.3kg, but they have a "heft" and density that tells you that you're dealing with quality here. 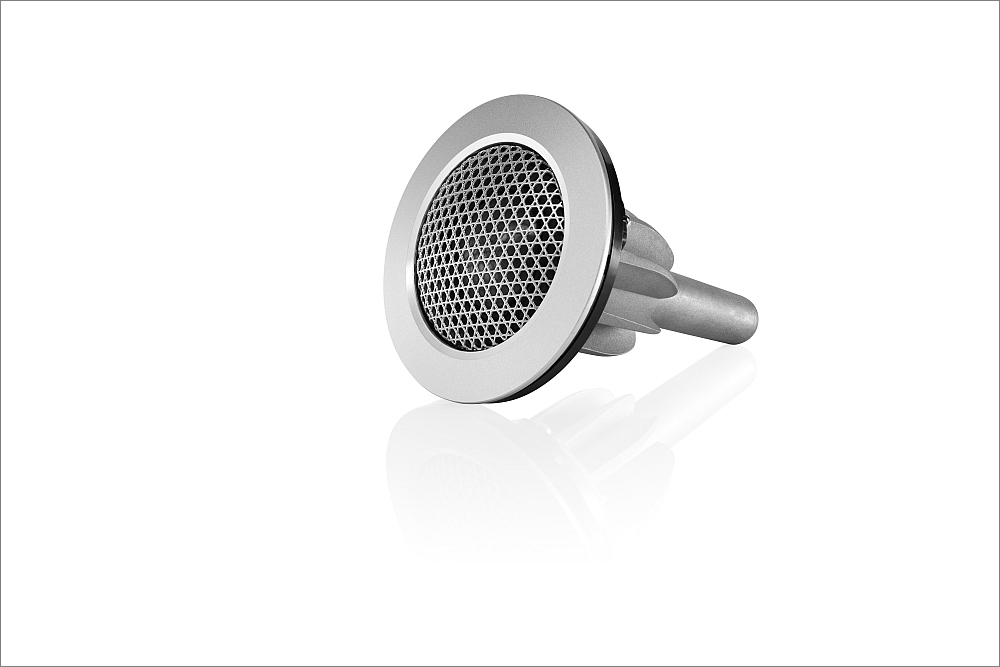 The main 165mm mid/bass driver is the new Continuum design, taking over from the Kevlar drivers that were a trademark and made many B&W models so instantly recognisable. The yellow tinge driver is gone, replaced with a modern silver colour. B&W supplies a choice of foam bungs (full or half) for the rear-facing reflex port. The simple arrangement features a solid insert within a larger foam surround meaning you can go sans, with surround (forming an effective smaller port) or full bung for variations in room placement options. 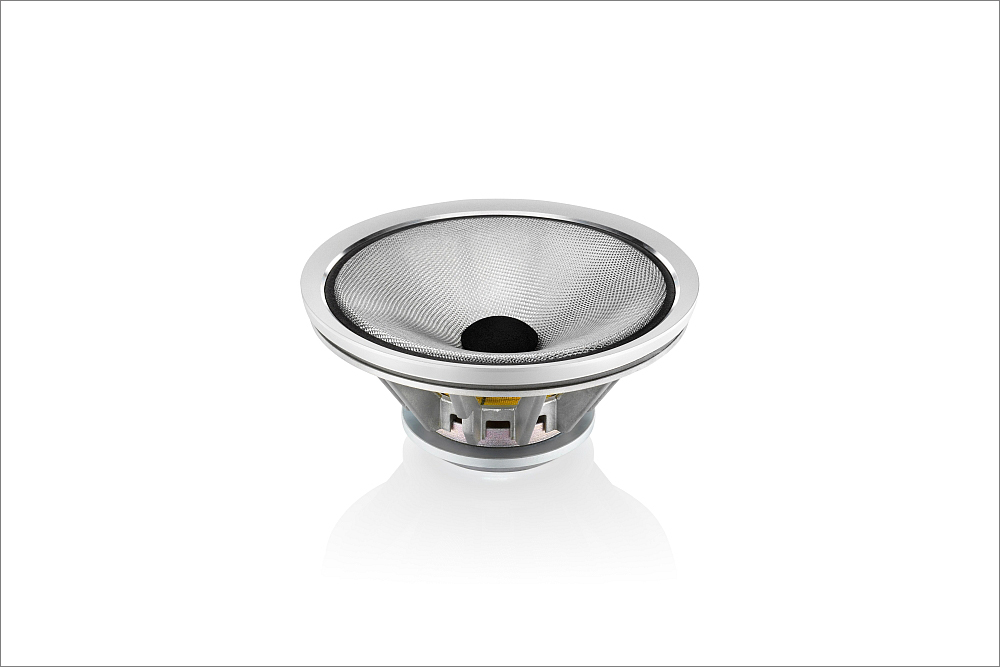 The specifications for the 705 S2 reflect Bowers & Wilkins’ high level of engineering. The speakers dig down to 45Hz at -6dB while the extension ranges to 33kHz with the same -6dB parameter. The 705 S2’s sensitivity is stated as 88dB while the impedance is quoted to be nominally 8 ohms with a minima of 3.7 ohms. This is a reasonably easy speaker to drive. As mentioned above, the review pair came in a gorgeous ‘Rosenut’ wood veneer while B&W also offers gloss black and mat white finishes. As always, the 705 S2’s are excellently finished and, from enclosure to drivers, are superbly engineered.

Here's where the rubber really meets the road. All the heritage, polish and technical awe count for nought if the speaker can't "walk the walk". Initial impressions are of an impressive weighty and authoritative presentation. Far more so in fact than expected from the size of the speaker. These babies play big, real big.

My room is not huge at 5.3m by 7.2m, but it's not tiny either. As well as being highly damped with furniture etc, it's got a nasty habit of gobbling up bass. In fact, it positively makes bass vanish at times, much to my frustration. In other words, any speaker wishing to hold its head up here had better have its bass together. The 705 S2 didn't make the walls shake, but neither were they embarrassed, or light-on. As stated above, B&W’s provision of the foam bungs allows a greater degree of bass adjustment to suit the environment and listener preference. 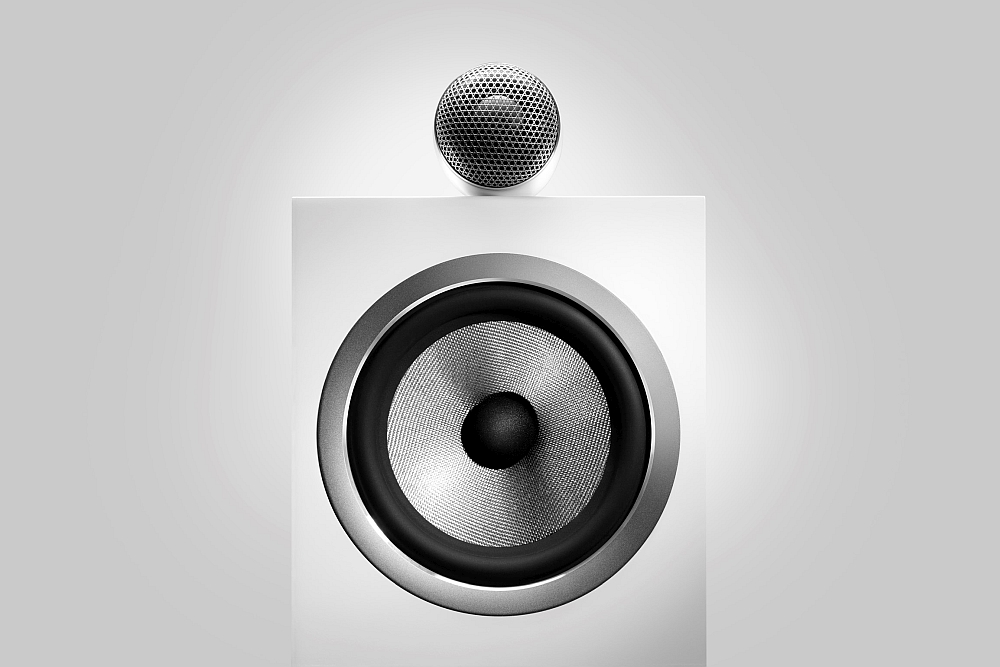 In my case, pulling the 705S2 out from the wall removed the slight trace of boom I was getting, negating the need for the bungs and letting out all the bass that was available. Even my room’s bass appetite was satiated by this arrangement and good, taut and musical bass was there into the mid 30Hz region. Good for all but the most bass-anxious listener.

The midrange and high end of these modestly sized speakers is something quite special. On Mercury's 2005 Dire Straits’ Private Investigations – The Best of Dire Straits and Mark Knopfler, Knopfler’s somewhat monotone vocals carry the exact amount of raspiness and "mumbling" close miked sound that he's renowned for. More importantly on this album, the dynamic jumps and swings were reproduced with aplomb and pizzazz. Drum hits were indeed "hit" and not just thumps of sound. Volume increases were just that – music got louder but not messier and there was no compression evident, even at less-than-sane levels.

Closing of the eyes resulted in a convincing illusion of a much, much larger speaker. The disconnect upon opening ones’ eyes, between the sheer impression of scale and the diminutive reality, was actually quite jarring. The B&W 705 S2 has managed to pull off a very difficult task here, being physically small, but with a sound presence many times its physical limits. Not many speakers, at any price, manage this as well as these speakers do. Well done indeed B&W. 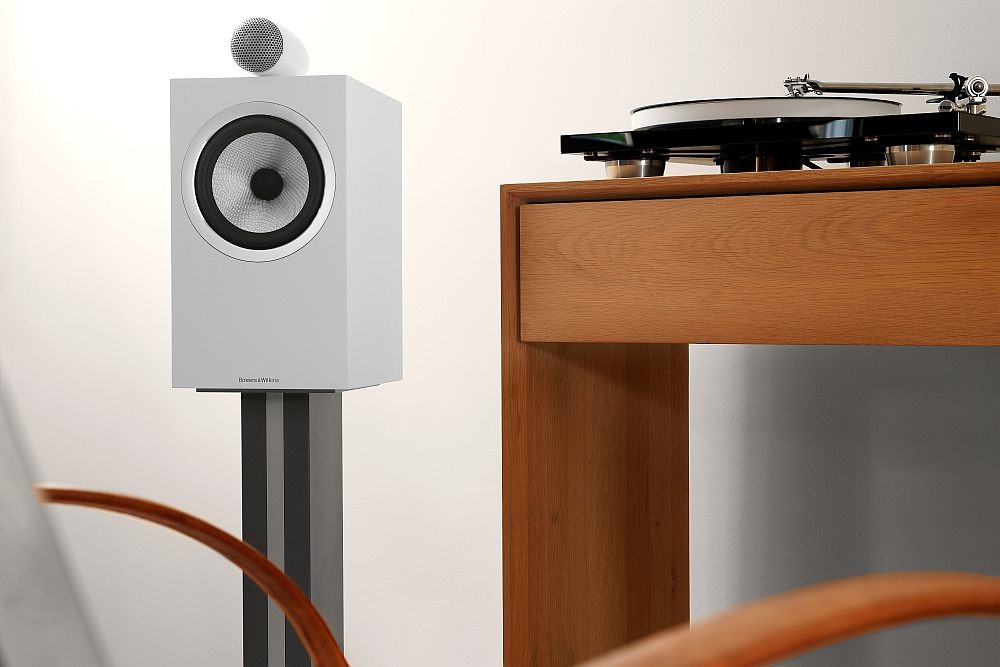 Vocals came courtesy of Mari Nakamoto, on the Three Blind Mice Mari album from an original Japanese issue XRCD 20-bit K2. Track one "Day Bay Day" (no, that's not a typo, that's how it's written on the album. Of course they mean "Day By Day"!) features Mari's voice front and centre stage. The B&W 705 S2 made me feel as if she was singing just for me alone. The presentation was that intimate, along with a quite spooky realism and micro detail. The sort of thing you could happily "drift off" to… We often seek this in our hobby, that elusive "something" that differentiates a simply "very good sound" from that magical “audio moment". I'm doubtful if I could put it into better context if pressed, but I certainly know when I hear it, and the 702 S2s definitely have "it". “It” is part imaging size and accuracy, part frequency linearity, part crossover design and of course, the rest of the playback system is important too.

In fact, I'm worried that this review may come across as too much of a "rave" for these speakers and in some ways, I guess it is. Others have listened to these speakers and while their impressions were broadly similar, they didn't have a chance to spend as much time with them as I have. If I were to be picky, I could wish for some form of adjustability on the tweeter module in order to fine-tune the direction of the tweeter a little? I'm sure I could find other niggles if I really tried, but that's expecting more from what is already very impressive, given the price and size.

If you have a room where gigantic floor standers and weirdly shaped behemoth speaker cabinets are shunned, if you have a system with a reasonably powered amplifier (or an upmarket receiver – lower-end models need to cope with the 3.7 ohms impedance dip) and you can place these 1.5m or more apart and 1m or more from the rear wall, I really can't think of any other speaker at this price level that will provide the sheer musical satisfaction I found in the B&W 705 S2.

They play loud, deep and clean, but more (much more) importantly they connect you to the music and are liberally laced with a large helping of "it". They are one of the few speakers, at this level, who's sound quality comfortably exceeds the sum of its excellent parts.