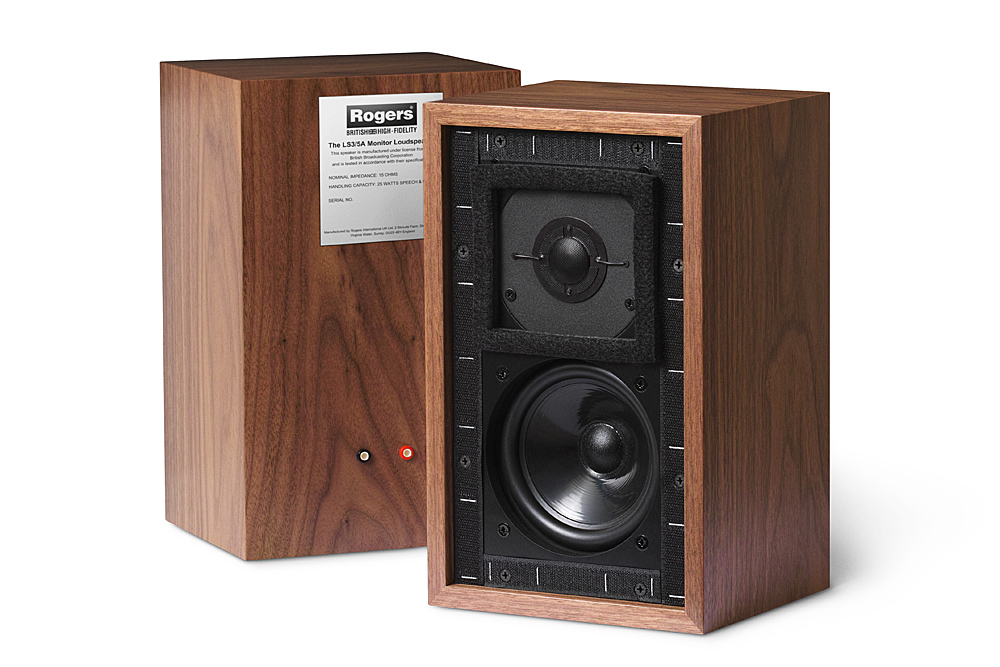 When, in the early 1970s, the engineering team at Britain’s BBC network was tasked with producing a small, dependable, accurate and consistent reference loudspeaker for outside broadcasting audio monitoring, the Dudley Harwood and Spencer Hughes-led team (later of Harbeth and Spendor respectively) produced the archetypal LS3/5. Subsequently, a modification to the original spawned the ‘A’ version which became, simultaneously, the classic and iconic LS3/5a, a superb design that also inspired many licenced versions by major British brands (one of these being Rogers). Its production ran for many years but the diminutive monitor has been in hibernation since the late 1990s. That is until the recent re-emergence of the Rogers brand under a new and dynamic leadership. With new engineering ideologies and in-house manufacturing, the new Rogers entity is now offering a revitalisation of both the iconic LS3/5a and LS5/9 BBC monitors. Here, we embrace the opportunity of scrutinising the classic LS3/5a Classic mini-monitor.

The original versions of the LS3/5a loudspeaker employed KEF-manufactured drivers with BBC-engineered and optimised crossover networks. I recall reading somewhere that, over the years, approximately 100,000 units were sold under the various licences (Rogers claims 50,000 of these under that moniker). It’s evident the tiny speaker has stood the test of time owing to its superb engineering, good dynamic expression and accurate tonal balance throughout the midrange and top-end. The bass remains contentious in some corners however, perhaps due to the small ‘hump’ rise through the 150 Hz (or thereabouts) band straying from absolute frequency response flatness. This does provide a larger-than-its-stature overall sound though, a feature which appeals to many in the right context (strap yours truly to that ride). Worth noting is the excellence of the design while its subsequent classic status has maintained the dollar value of second hand samples high and the availability rare.

While the ‘new’ Rogers has certainly landed on to the audio stage running at a powerful pace with its high quality offerings (an LS5/9 is also part of the company’s stable and an LS stand and E20a amplifier are imminent), it is not alone in providing an LS3/5a recreation – it’s joined by Oxford’s Falcon Acoustics whose approach takes a somewhat alternative tack. 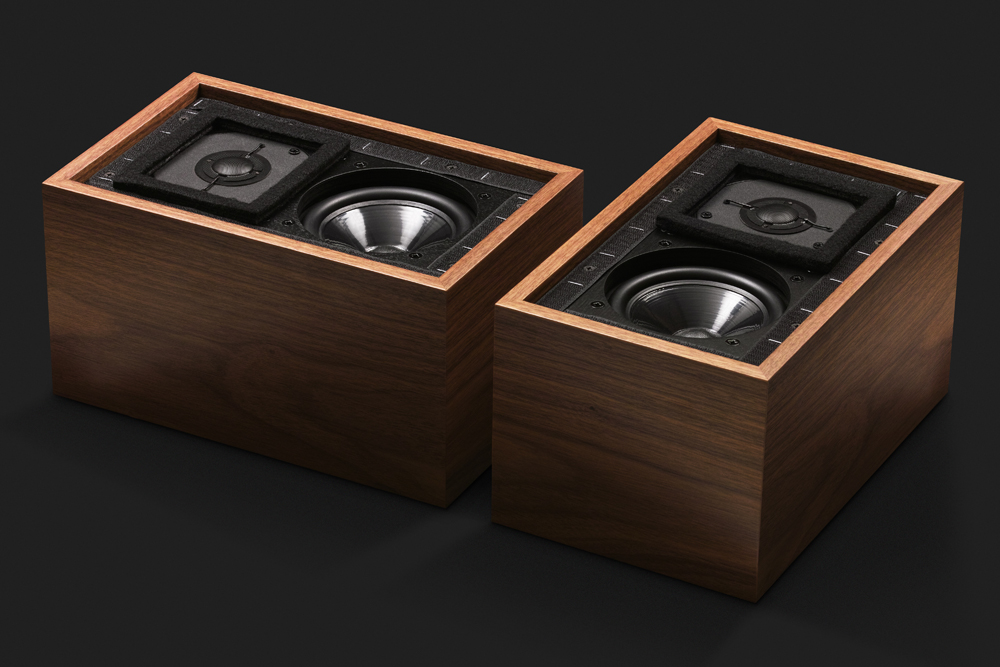 I was curious to hear Rogers Chief Engineer Andy Whittle’s reasons behind his push to revitalise the classic BBC design:

Basically I used to be the Technical Director at Rogers during the 90s and designed the AB1 Subwoofer, DB101, and LS range of speakers. At the end of the 90s the UK factory was closed because of financial crisis in Asia. In 2018 I had a meeting with Dr Lee Chairman of Wo Kee Hong and we decided to re start UK manufacture of one of the most famous loudspeakers of all time (with over 50,000 pairs sold!) the Rogers LS3/5a.

What attracted us to the original BBC designs is that when we visited Hi-Fi shows it seemed that many of the new speaker designs actually sounded worse than the old designs. In fact it appears that this is not just limited to speakers but also amplifiers and turntables. So we decided to press ahead with the BBC designs.

We now have BBC license for both the LS3/5a and the LS5/9. The LS5/9 is in production this month so we are now manufacturing both models here in UK. It’s taken approximately two years to get the speaker back into production, we have taken the upmost effort to make as authentic as possible to the original BBC specification. We are making the 15 Ohms version only as we believe this is the one that sounds the best.

We have reverse engineered the drive units in Asia, with a Bextrene cone for the woofer. The woofers then come to UK and have two separate coatings of a different material to get the right sound. Testing and pair matching are all done in UK. We have also reverse engineered the tweeter and tooled up a Mylar/Nomex dome/coil assembly. Again this comes to UK where we fit the dome, QC test and pair match.

While I’m confident certain engineering herbs and spices have been added to the new drivers (I’d guess in terms of materials, magnet and even adhesive technologies), it could be said that visually, both drive units are nigh indistinguishable from the original. Ditto for the overall look with its matte black baffle, the squared felt tweeter surround and the not-the-neatest-but-historically-accurate stapled Velcro mounting system for the grille, itself a throwback to the original’s acoustically transparent ‘Black Tygan’ affair.

As per the original, the Rogers LS3/5a Classic is a 15 ohms design with low-ish sensitivity quoted at 82.5dB at 1 watt/1m. As inefficient as that sounds, in practice I found the speaker to produce reasonable output with a surprisingly modest volume level adjustment against the 91dB-efficient (measured and confirmed) Wilson Alexia Series 2 reference speakers. Frequency response has been quoted as spanning from 80 Hz to 20 KHz with +/-3dB parameters. The network has been crossed-over at 3 kHz. 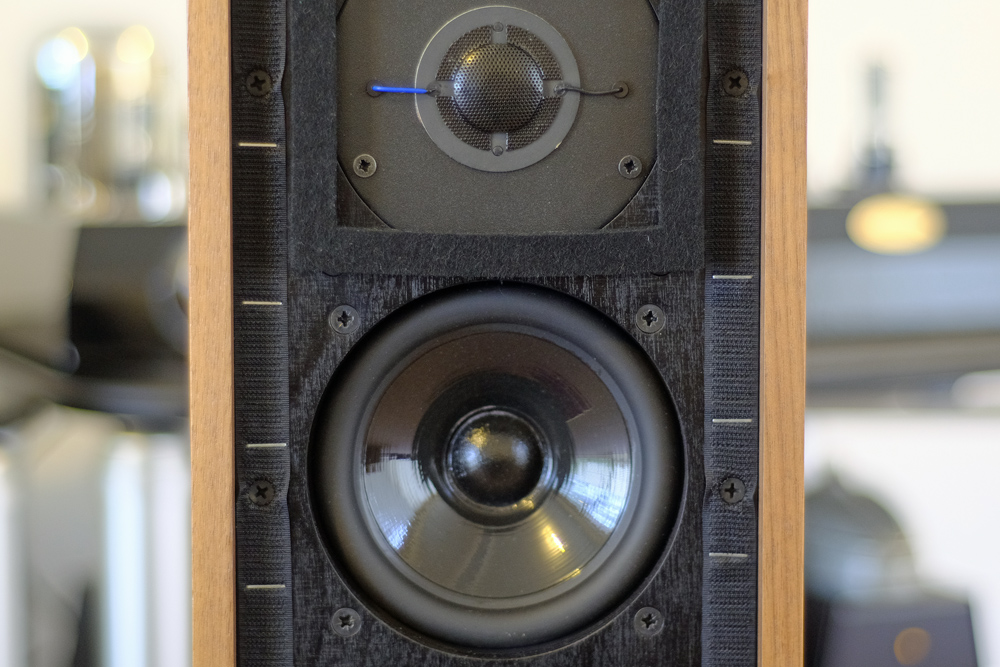 The Rogers LS3/5a Classic is beautifully constructed and the walnut veneer of the review sample units was flawlessly applied. Said veneers are offered in Walnut and Rosewood with other options available on special order. The fully-veneered rear panel houses 4mm silver plated banana sockets only (Multi Contact from Switzerland). While this connecting option is visually neat and tidy, and the sockets appear to be of good quality stock, I would have preferred good multi-way binding posts which could also accept spade lugs. So, banana-terminated cables only need apply here.

Gimme back the speaks

Where did the freakin’ speakers go? No really, the LS3/5a Classic pulled off the much-sought after disappearing act at the very highest level. In my room, I would challenge any card-carrying blindfolded audiophile to pinpoint the speakers while playing a good live or studio recording. This speaker is totally transparent to the soundfield capture as Ryan Adams’ “Sylvia Plath” from his superb Ten Songs from Live at Carnegie Hall clearly and movingly demonstrated. And of note, such trickery was performed with rudimentary acoustic treatment prior to the full installation of proper professional acoustic panelling in our new listening room. Remarkable.

Of course the renowned capabilities through the vocal range were replicated in this new version. As always, in the period between auditioning and actually ‘penning’ this review I made extensive auditioning notes. While in that process my emphasis was on making clear the tremendous resolution and midrange beauty of the LS3/5a Classic. To that end, I jotted on my notebook: “Vocals, vocals, vocals, piano, piano, piano” followed by further specific listening and descriptive elaboration into those observations. My point was to really convey those extraordinary qualities within that region of reproduction. What’s more, those qualities were displayed with an enormous power of resolution and separation where each music/vocal strand was discernible and intelligible within the context of the overall musical presentation in a non-disruptive way. 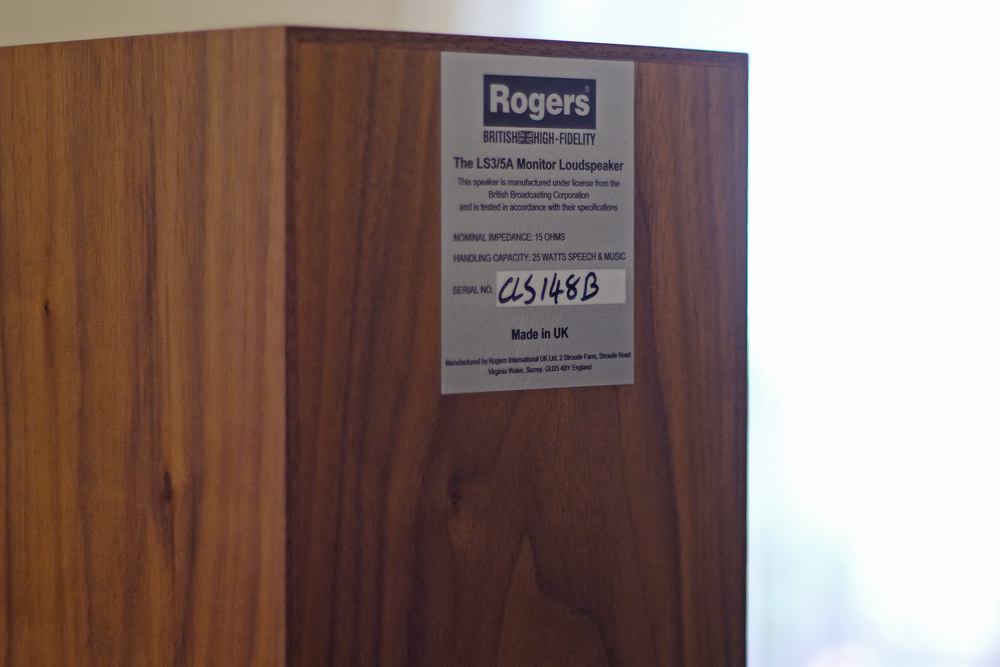 Indeed, play male or female vocals no matter the recording quality (better quality is, of course… better) and you’ll hear subtleties and expressive nuances which only the very best transducers can achieve. It’s not just mouthed detail and micro-transient agility, nor the expressions of vocal inflections and oscillations which are reproduced beautifully (it’s all of those combined), but it’s also the transparency and tonal purity as added final ingredients which support the range of emotions the LS3/5a Classic communicates. It’s an engaging, captivating little transducer which somehow manages to tell it like it is – as a monitor should – but in a way that is not clinical. So I’m not talking the analytical precision of a surgeon; I’m talking the meticulousness of a master craftsman merging art with exactness.

Tori Amos’ Boys For Pele is a superbly recorded creation and the power of Amos’ Bösendorfer grand on the track “Little Amsterdam” comes across in a grander sonic representation than a 12-inch-high speaker should offer. The attack of the notes and, again, that tonal purity and delicious decay create an aural mirage of startling authenticity. And yes, even the left-hand-side of the keyboard was weighty and full-bodied. Brilliant.

Also beyond its scope, you’d think, is the mini monitor’s low-end performance. It can’t defy physics, of course, but the well-known bass hump (I gather Rogers kept this original deliberate design feature) does trick you into hearing a fuller sound, a more potent bass register, than the LS3/5a’s stature. It elevates the small speaker to emulate the bass performance of a standmount with both a more voluminous cabinet and larger mid-bass driver (remember this is a 110mm driver, albeit an astonishing one). The rising drum force in the intro to “Strange Waters” from Bruce Cockburn’s The Charity of Night album was smile-inducing. “From that box… really?” I found myself thinking. I heard tight, punchy and reasonably deep drums that enhanced the music’s drama. In this case in particular, the “accuracy” mantra is thrown out the window for a “this sounds like music” scenario where you connect with what’s on the tray, platter or hard-drive. Sure, a floorstander will provide a deeper low-end and produce wall-shaking pyrotechnics but, boy, does the Rogers fool you… in a good way. 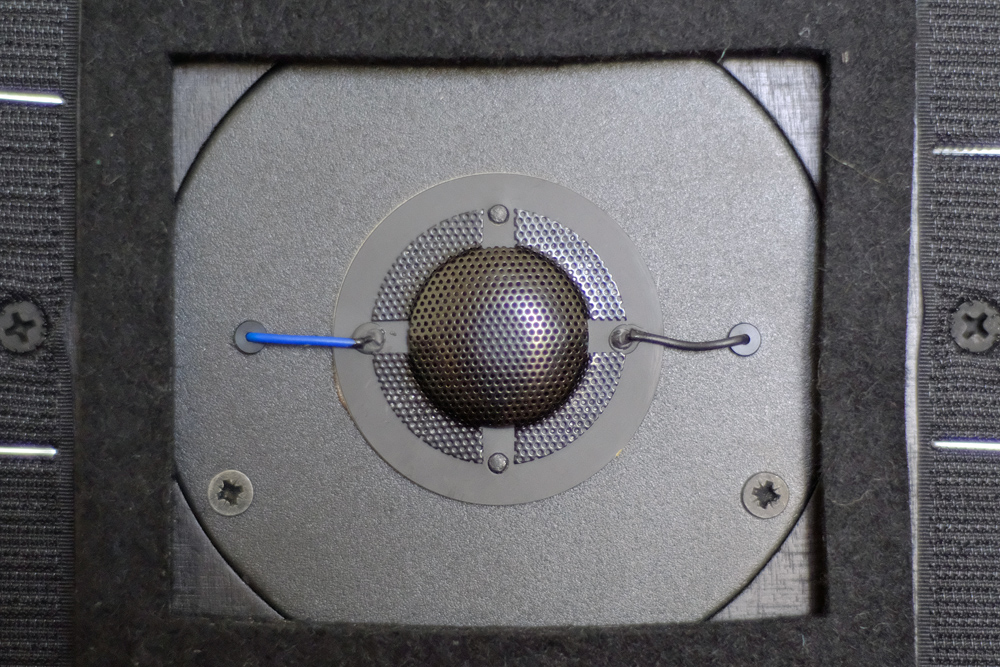 Extremely impressive too was the LS3/5a’s rendering of swift transient attacks and leading edges of notes. With well recorded guitar tracks – such as Duet from Luc and Lagrène, one of my long-term go-tos – the sharpness of the note starts renders them snappy and quick, then the accurate decay trails away naturally, a credit to the subtlety and delicacy of the new tweeter design.

As alluded to above, soundstaging capabilities were off the planet. I’m talking images of solid presence projected well outside the speakers’ plane, with extraordinary height, depth and width perspectives. Super, super-focused images when the recording permitted. So, I don’t just mean “disappearing act” I mean localisation, projection and soundfield plausibility at the top-most level I’ve ever experienced.

What a surprise, and delight, this new-generation LS3/5a has been. Sure, its reputation preceded it, but having not heard the original at length, I nevertheless was expecting a good performer with, perhaps, a somewhat unbalanced and mellow ‘British’ sound. Oh man, was I wrong.

Rogers’ deconstructed and re-engineered drivers are highly developed performers, as is the crossover, which has been expertly ‘voiced’. The overall construction and fit and finish are first class too. All these elements combined offer not just outstanding performance but also a thoroughly modern take on the classic BBC mini monitor platform. 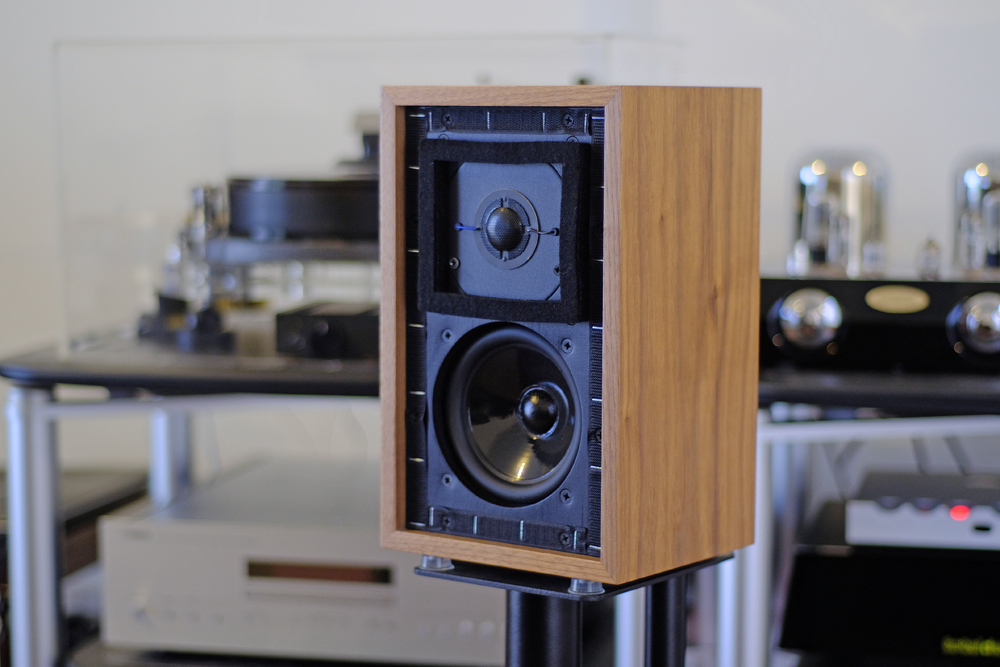 This re-imagination is not just a “good performer”, it transcends the bar set by the mini-monitor category. It redefines it, establishing state-of-the-art levels for resolution and micro-detail, exactness, transparency and purity throughout the midrange while projecting a grander scale than its diminutive size would suggest.

The LS3/5a is a package of undeniable sonic satisfaction that empowers the act of music listening. Pleasure and blissful engagement are what the Rogers LS3/5a Classic commands. That, is the true legacy of this icon. Concur? Rogers that!