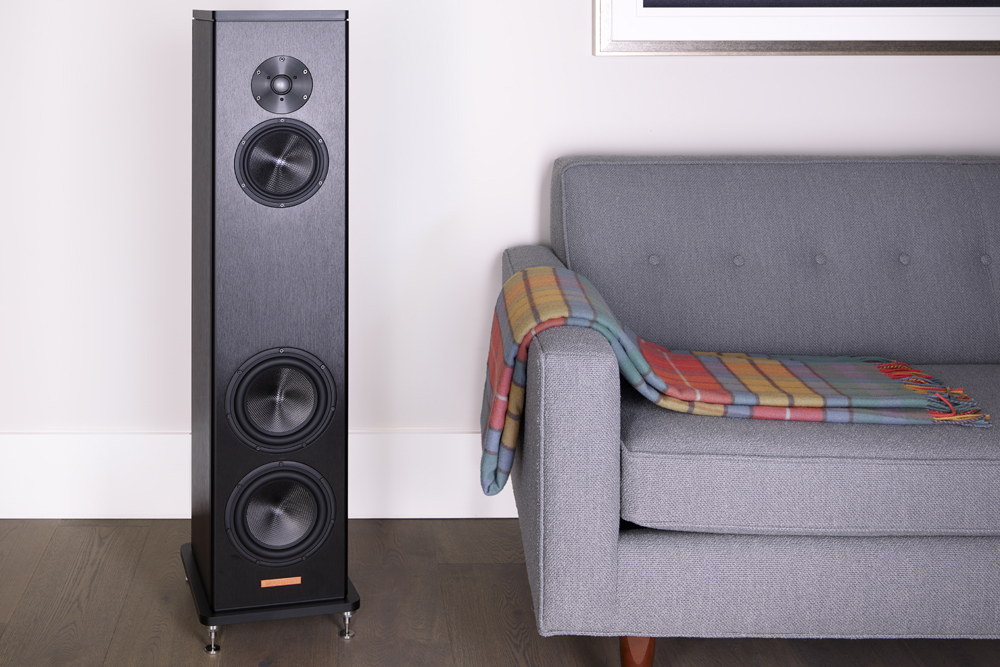 In the pursuit of the perfect loudspeaker design, audio engineers are faced with a number of imposing challenges. Obviously, careful thought must be devoted to the proper design of a driver complement, understanding the way in which those drivers, each manipulating or moving air within a given frequency range, will interact with one another in the final design. This complex interaction will in no small part also depend on the nature, components and execution of the crossover network and of course, the partnering or driving electronics (the amplifier) to which the speaker will be connected.

Among the skilfully balanced interplay of the various design aspects must feature another particular consideration – the loudspeaker cabinet itself. While the goal of a loudspeaker is to transduce an analogue electrical signal into the rarefaction and compression of air to produce sound waves, another equally important goal in the design is to ensure that its cabinet does not!

This may in principle sound easy enough, but in my experience, ranks among the most difficult, expensive and laborious design tasks to achieve. In the game of moving air, the aim is to do so in the least coloured way, adding to the precious audio signal the lowest degree of distortion, dynamic compression and grain possible, so that the musical signal may emerge from the drivers unscathed, to be enjoyed in the way originally intended. In more recent years, loudspeaker designers have become increasingly efficacious in constructing loudspeakers of materials in themselves considered to be inert, or assembled in a way so as to render them inert in the completed product. Rockport Technologies, Kharma, Wilson Audio, Evolution Acoustics and, of course, Magico (to name only a few) have all made great strides in designing and building loudspeakers that are (as much as feasibly possible) structurally inert. It is no coincidence then that these names (and many more) are often associated with producing the most musically engaging, detailed, nuanced and tonally authentic musical experiences.

A few years back, for my first review with SoundStage! Australia, I had the privilege of auditioning for an extended period, the Magico S3 Mk.II speakers (review here), which at the time struck me most in the way they could produce such a thoroughly seamless and enjoyable listening experience within their price bracket. The technical sophistication of their drivers (particularly the phenomenal disappearing act performed by the diamond—coated beryllium tweeter) and the brutal rigidity, solidity, and inert nature of its cabinet were in my humble opinion, the main progenitors of this considerable trick.

I was therefore both excited and delighted to be offered another ride of (what was) the most recently saddled pony within the Magico stable – the A3.

In short, the A series was conceived out of the desire to bring to the market, a full-range loudspeaker “incorporating similar design philosophies found in higher-end Magico offerings” at a price point that would accommodate accessibility to a much wider audience of audiophiles and music enthusiasts. Devised as a similar moderately tall floorstanding design as the S3 but with a smaller footprint, I was very keen to discover whether Magico would be able to achieve this formidable task.

The A3 is a mid-sized floorstanding speaker, weighing in at 49.89 kg and featuring the following dimensions: 112cm x 27cm x 23cm (hdw). The outer enclosure is formed from exquisitely machined black-anodized 6061 T6 aircraft grade aluminium. Each face of the speaker is constructed from thick plates, touting a gorgeous brushed straight-grained finish that subtly interacts with room lighting and provides a sense of tactility and animation. Long stepped trenches run along the edges of these plates skilfully masking the zones where they interlock and providing a bold aesthetic contrast to the gently rounded lateral edges of the front baffle. 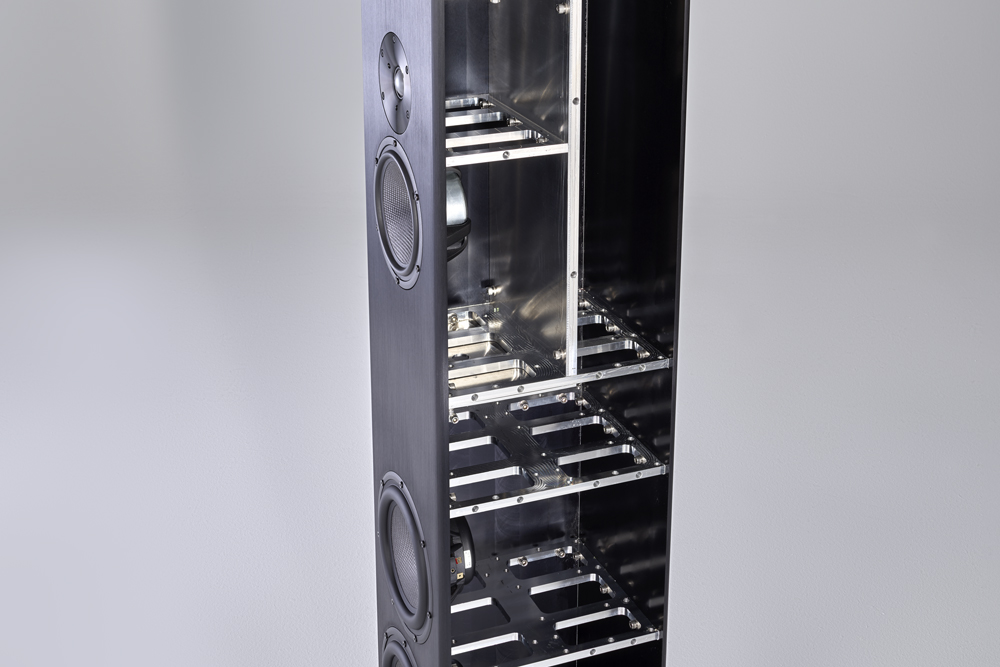 Akin to Magico designs of yore, the non-ported cabinet features a complex internal metallic bracing structure to further increase stiffness and mass, while lowering structural resonances. In a manner not dissimilar to the S3, a “calibrated” sub-enclosure is wrought from the posterior aspect of the front baffle to provide an “optimized” functional environment for the midrange driver, dissociating it from the negative effects of back-pressure generated from the activity of the bass drivers. The speaker effectively couples to the floor via four spiked outrigger feet machined into the base plate.

As with the S3, the A3s came well packaged in large cardboard boxes. Despite their weight, on my carpeted listening room floors, the speakers were easy to ‘walk’ out from the boxes and easy enough to lift/carry, although I would consider the presence of a helper mandatory for that exercise.

A new 6-inch multi-wall carbon fibre midrange driver augmented by an XG nanographene layer has been formulated for the A3, improving the stiffness to weight ratio and damping properties of the unit. The drivers boast extra-large overhung neodymium magnets and 75mm pure titanium voice coils. Bass duties are relegated to two similarly impressive 7-inch graphene nano-tec drivers. The A3 apple clearly didn’t fall far from the S3 tree!

Finite Element analysis has been implemented to test, optimise and integrate the drivers and the exclusive Magico ‘Elliptical Symmetry’ crossover utilizing high-quality Mundorf components. The crossover is coupled to the enclosure’s base plate to facilitate the most direct transmission of parasitic mechanical resonances from the delicate electrical signals. 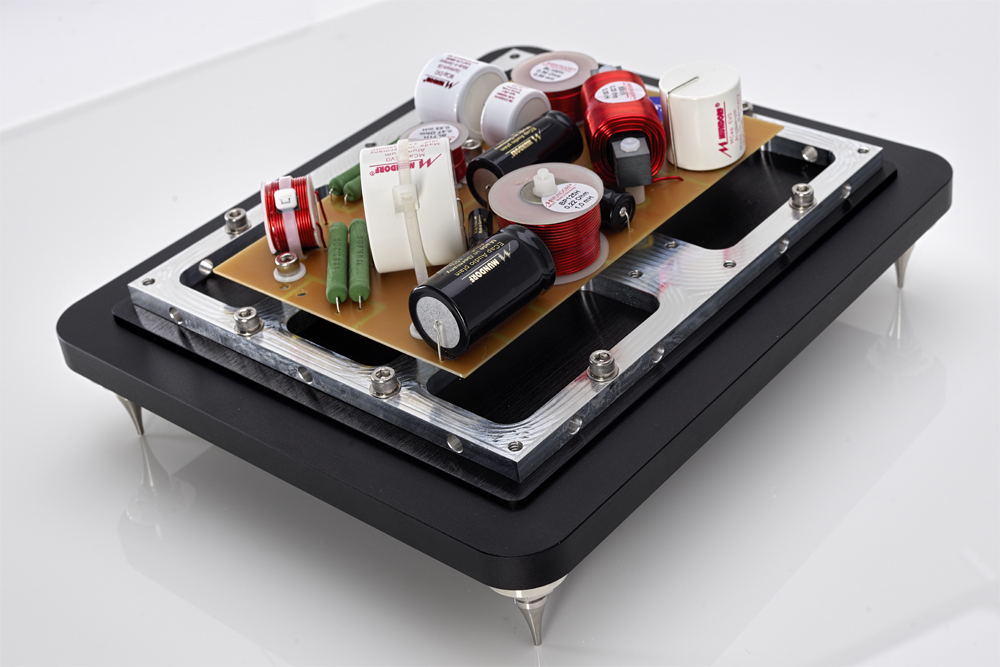 The A3s featured high quality and easily tightened cable terminals, which maintained their grip on the spade connectors of my EnKlein Titans throughout the review period.

Sensitivity of the A3 is rated at 88dB with a nominal impedance of 4 ohms. Frequency response is a claimed 22Hz to 50kHz, comfortably classing it as a ‘full-range’ loudspeaker.

In opposition to homogenising the character of this review by arbitrarily citing audiophile benchmark platitudes or how random instruments sounded on recordings with which you may have no familiarity with, I’m going to attempt to characterise the sound of the A3 in two particular ways.

Firstly, I’m going to report the extraordinary or most apparent facets of the A3’s sound that render it unique or distinct from other loudspeakers in its class; and secondly, I’m going to compare it with the nature of the S3 Mk.II sound, in particular those elements which I found most musically persuasive or feel contributed most in establishing the enthral of the somewhat more ambitious Magico. As the A3 was designed to incorporate the virtues of the more costly Magico models, I think it is from that standpoint that this loudspeaker is best evaluated. 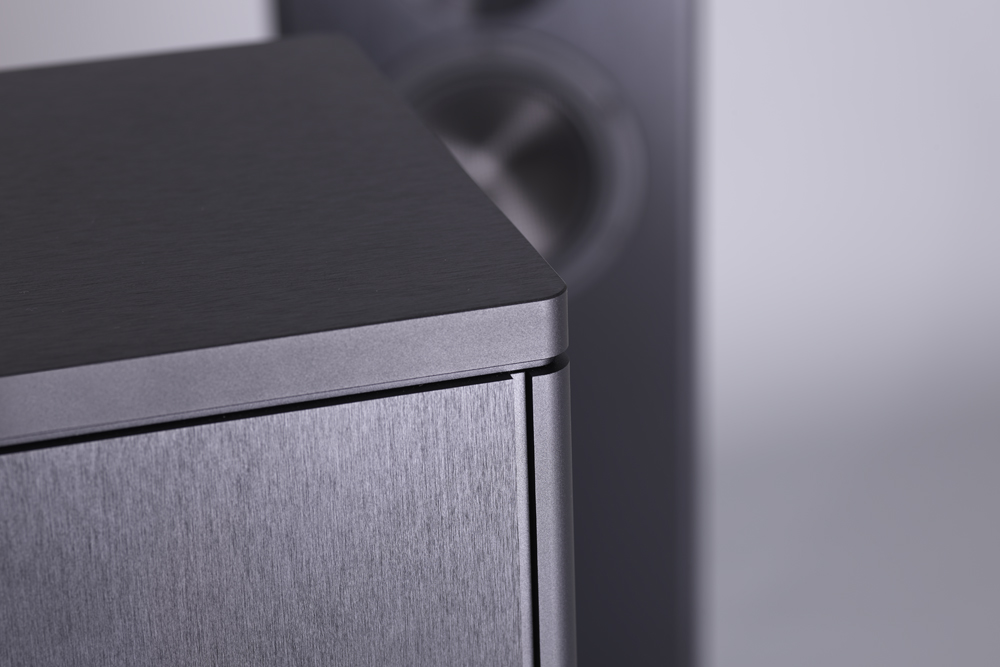 The A3s possessed some of the most surreal imaging ability I have heard from loudspeakers at any price, making their capacity to do so within their relative price bracket the first standout feat I’d like to mention. The A3 soundstage, although limited in absolute height, was curtailed in no other dimension and featured scale that was unexpected in speakers of this size. Music projected from the A3s far beyond the boundaries of my front and side walls, and they performed an impeccable job of layering the various instrumental lines in a given recording.

Images were well demarcated, densely portrayed and cast with commendable stability, creating a finely woven dioramic representation of the soundstage not unlike what I recall from my audition of the Yamaha NS-5000s. Set up in my room in the nearfield with a fair degree of toe-in, the slim, cautiously handsome baffles and stealthy profile of the A3s helped facilitate a literal disappearing act, divorcing entirely the impression that sound was indeed emanating from the positions of the speakers themselves. Kudos must therefore be again proffered for the integration of the A3 drivers and their ability to achieve such a standard of phase matching and musical coherence.

In reviewing the larger S3, I was most awestruck by the finesse and transparency of the diamond-coated beryllium tweeter, remarking, “It was the most sonically invisible and musically satisfying dome tweeter I have yet heard”. Experimentation and further refinement of tweeter design for subsequent Magico speakers have clearly led to incremental gains in the units employed in the A3s. 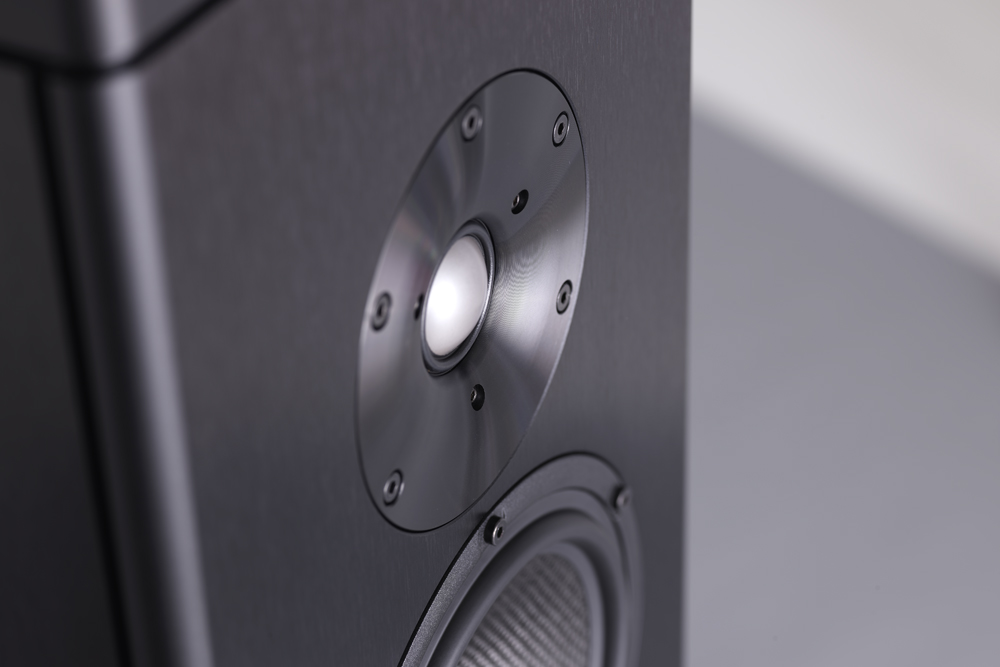 If the S3’s tweeter was sonically invisible, then the tweeter in the A3 was an auditory ‘black hole’. Following several hundred hours of burn-in and stabilisation of its capabilities, the A3’s top end was absent of nearly any character in as much as it seamlessly and completely assimilated into the musical mix. I know those who may perhaps prefer a little more ‘presence’ or ‘sizzle’ in their top end, but I can guarantee even the most air-hungry audiophile would be captivated by a tweeter that so masterfully eschews magic tricks in preference for absolute self-deprecation. I would add that anyone looking to remedy a system erring on the ‘bright side of life’ would do well to have a listen to these. Bravo (again) Magico!

The bottom end of the A3 sound was weighty, extended, profoundly damped and relentlessly taut. The port-less cabinet facilitated a very even-handed and tuneful bass performance, right down to the lowest notes. Disciplined by an effortless and powerful amplifier like the Halcros, the A3s never failed to track the bass, however in comparison to the S3 (and my reference Evolution Acoustics speakers), I did find that the smaller drivers began to show some mild signs of compression and strain when played very loudly. At more civilised sound pressure levels, the A3’s bass performance was essentially peerless in comparison to their competition.

Overall, I found the A3s to be fast, revealing, tonally neutral and invariably engaging. Their skills in the aforementioned domains are not to be underestimated.

A concession in the ownership of a small to medium-sized loudspeaker is an understanding of the absolute limitations to their performance parameters. In the absence of the ability to move great volumes of air with minimal excursion of the drivers, such loudspeakers best serve their purpose when played at moderate (and I would add, sensible) volume levels.

While large floorstanding designs have fundamental limitations of their own, I have always found that such designs (no doubt in part due to their greater efficiency) are indispensable in the portrayal of absolute scale, presence, weight and macrodynamics. It’s no accident that the flagship loudspeaker offerings from any company are always the grandest.

My experience with the Magico S3 Mk.IIs was indelible. Up to that point, I had not heard a loudspeaker design at that price bracket that captivated my attention and drew me into the musical performance in the way that they did. Their absolute lack of any overt form of colouration or compression rendered them a remarkable achievement, in my opinion. 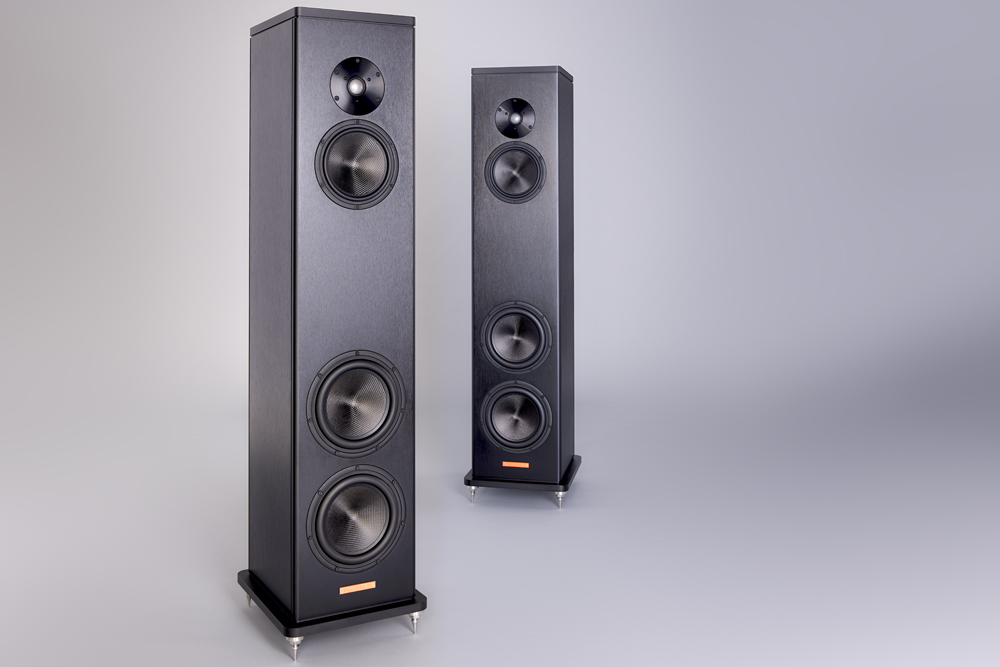 Though ultimately constrained by the size of their form factor and the cost savings that must be executed in the inception of a trickle-down design, the Magico team, have in designing the A3s met and likely exceeded their objectives. If the A3s were intended as a summative expression of the technologies that were so successful in imbuing the S3 with its remarkable sonic capabilities, then I can undoubtedly state they are a triumphant victory.

Possessing a technologically-loaded and exceptionally integrated set of drivers, in a nearly acoustically inert and impeccably finished enclosure that would maintain pride of place in any high-end system, the Magico A3s are a veritable bargain at their price point and are capable of the kind of sound production also rarely encountered in this end of the market.

For any audiophile or music lover who is looking for the Magico house sound without taking out a second mortgage on their actual house, I would thoroughly suggest an extended audition of the Magico A3.