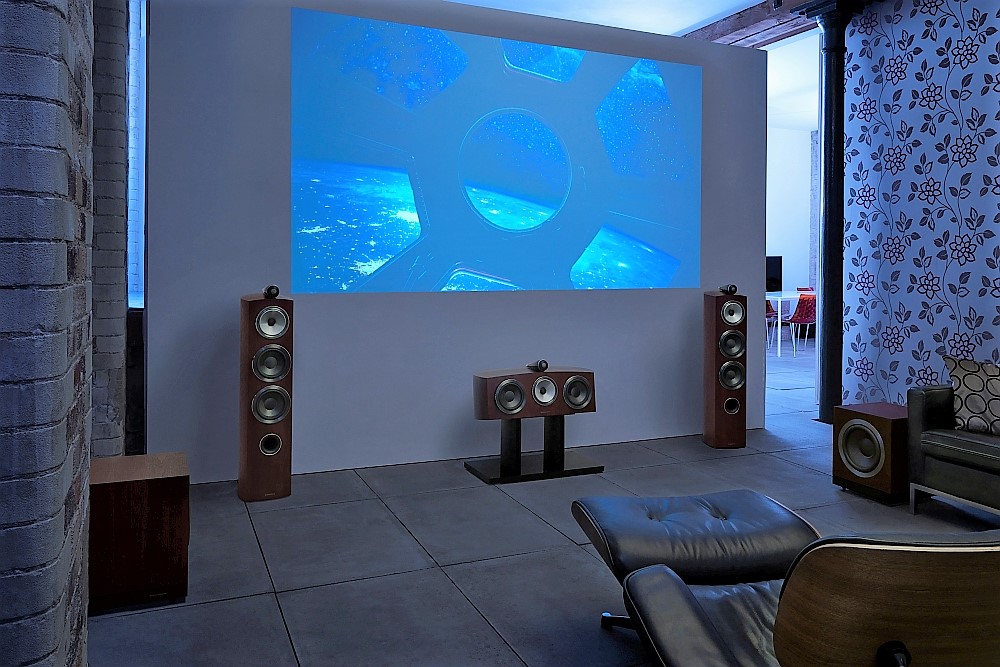 To an even greater extent than the development, and subsequent adoption, of high-tech materials in the fabrication of loudspeaker transducers, the subwoofer space has benefitted from the advancements in DSP and the general digital manipulation of the audio signal’s low frequencies. Further digitalisation has been incorporated in subwoofer functionality via Wi-Fi’s ubiquitousness, Bluetooth and the employment of smart device Apps. A thoroughly refined adoption of these and other technologies has been cunningly implemented in the new high-tech Bowers & Wilkins DB2D subwoofer.

The DB2D subwoofer presents itself to the world as a deceivingly simple design. Packed within its small almost-cubed form however, are two high quality drivers, connectivity, the powerful driving electronics and an added bonus in terms of DSP smarts which are customised to both seamlessly couple the subwoofer to the main speakers and to the listening environment. The DSP system – and other general control functions – is conveniently driven via a custom-designed free App.

For starters, let’s describe the driver technology at hand. The DB2D features the latest Bowers & Wilkins bass driver technology (identical to the 800 D3 flagship high-end speakers) with a balanced push-push configuration of two 250mm (10-inch) Aerofoil drivers. Each Aerofoil driver features an extremely low mass yet very stiff diaphragm, a high excursion rubber roll surround and a large diameter copper-wired vented voice coil capable of withstanding the extreme temperatures that occur when high outputs are required. These superbly engineered drivers, coupled with both the powerful in-built amplification and the optimally-designed enclosure provide an outstanding frequency range down to 8.5Hz at -6dB (500Hz upper range) with a quoted frequency response of 10Hz to 350Hz -3dB. These are superb low frequency specifications for a subwoofer of such room-friendly dimensions (430mm high by 377mm wide by 360mm deep).

The driving force behind these superbly-engineered bass drivers is a Hypex Class-D amplifier rated at 1000 watts. Class-D amplification is an astute choice for subwoofer electronics due to the inherent high damping factor, high efficiency (cool running) and lightweight of well-designed amplifiers in this class – of which Hypex is considered by many to be the best example of this technology. Further, 1000 watts of power will provide oodles of headroom under the scenarios this mid-sized subwoofer is likely to be in (let alone the fact that multiple DB2Ds can easily be either daisy chained and/or channel-designated). For large listening environments and/or home cinema arrangements, Bowers & Wilkins' twin driver DB series offers the DB1D, the top subwoofer in the series with two 300mm (12-inch) woofers and 2000 watts on tap. The DB3D will suit smaller to mid-sized rooms and houses two 200mm (8-inch) woofers and shares the same 1000 watts Hypex amplifier as its DB2D sibling.

Bowers & Wilkins refers to its DSP engine as a “Digital preamplifier with Dynamic EQ”. The on-board DSP facility – located within a thin brushed aluminium sub-section on the bottom of the DB2D and simply adorned with a company logo and single power LED – provides the digital ‘smarts’ for easy calibration to the room and mating to the main speaker system, with the entire functionality available via a dedicated free App for both iOS and Android. The multi-menu App allows smart device control of input selection, input type (LFE, XLR or RCA), level trim and global level output, Input Equalisation, Room Equalisation (no microphone required other than your smart device – see more on this below), auto turn on/off and more. A neat graphic positioning guide provides suggested location/positioning options for differing room types.

Input socketry is provided via two XLRs, two RCAs, two 12V triggers via 3.5mm mini-jack and a 9-pin D-connector RS-232 for control/integration. This connectivity is located at the rear of the Digital Preamplifier section towards the lower section of the subwoofer.

I placed the DB2D in a similar position to my existing reference subwoofer, towards the right-hand-side and front corner of the home cinema/stereo room, and wired-up in preparation for the calibration process. In the past with other subwoofer and DSP-type products, the process of tuning and calibrating the subwoofer or speakers has been anything from somewhat daunting to almost hair pulling-stressful. In fact, some products have required the installation by a company representative who is charged with navigating the complexities of proper configuration and calibration of both the software and hardware. This has often required the careful analysis of a variety of recorded tones from all kinds of locations around the room after the acrobatics of multiple microphone positions. At times, software and firmware incompatibilities have been discovered along the way, requiring further processes and recalibrations.

But as far as the DB2D is concerned, the entire experience was a relative walk in the park. Granted, the DB2D’s process itself allows minimal user input and pulse-correlated frequency response readjustment capabilities post-calibration, but the end result – in my room context at least – was accurate enough and, importantly, musically satisfying enough to not require any user futzing. The Bowers & Wilkins engineers have nailed the calibration and EQ functions.

Firstly, the calibration process involves placing the smart device, in my case an iPhone X, with the phone’s microphone facing forward in line with the edge of the subwoofer’s front baffle. This is done in order to first calibrate the device’s microphone/s. Via the App, you activate the process and sit back while the subwoofer does its pulse-playing dance. Secondly, once the first procedure is finalised, a refinement and room/mains EQ follows where a similar set of pulses is played back while you hold the smartphone at ear level in the most-used listening positions, which in my case were three sitting places along the main sofa. And that’s it! Room. Calibration. EQ. Done. 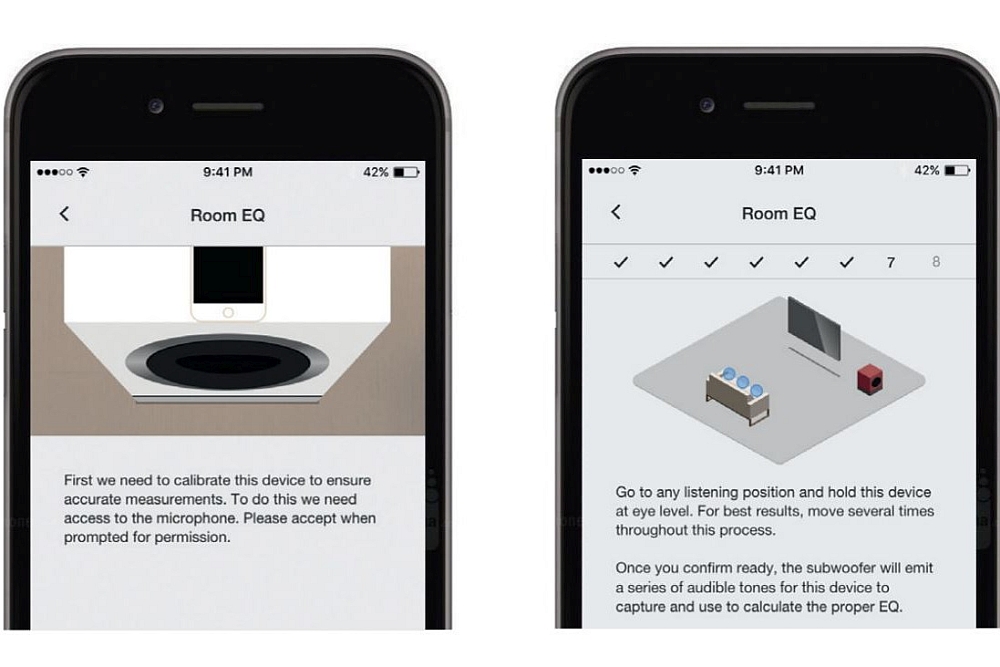 What happens next is where the fun starts. Playing back the first piece of music via Vermouth Audio’s Little Luccas Mk.II speakers as the main monitors (also used the wonderful Axis VoiceBox S monitors at other times too), the well-recorded albeit bass-heavy “Deep” by Marian Hill rewarded with an intact vocal presentation via the superb monitors from the mid-bass on-up while the lower frequencies took on superb depth, tightness, detail and perfect room-coupling power.

Many subwoofers excel at delivering big low frequencies (with varying degrees of depth depending on their size and output capabilities, of course) but given their bass pomp and circumstance fail to provide the true tone or speed/transient attack of an acoustic bass, or electric bass for that matter. The DB2D sailed through these tests. Marcus Miller’s instrument – of both acoustic and electric types – played with accurate tonality, meaning the bass instruments sounded like they do when you hear them live. And when Miller vigorously plucks the strings, you hear a fast ‘whack’ with the signature of metal or gut.

One of my long-term bass-testing tracks is Brian Bromberg’s rendition of “Come Together” from his 2002 album Wood. This is a superb production which captures not only the acoustic bass in its truest tone but it also highlights Bromberg’s complete mastering of the instrument. The speed, tonal truth, depth, wallop and all-round excellence of the DB2D’s reproduction of this outstanding piece of music was stunning. The sheer detail and balance of the DB2D’s rendering of this track could be compared to full-range speakers at a far higher price point in terms of integration and all-round performance.

Neil Crowley Trio’s modern Jazz compositions on The Face of Mount Molehill came across with exemplary dynamics, with Rex Horan’s acoustic bass sounding full, rhythmic and detailed. Equal abilities in terms of punch and tightness were shown via the DB2D’s handling of Evan Jenkins’ kick drum pulses which punched into the room and were felt through the sofa at the listening position. 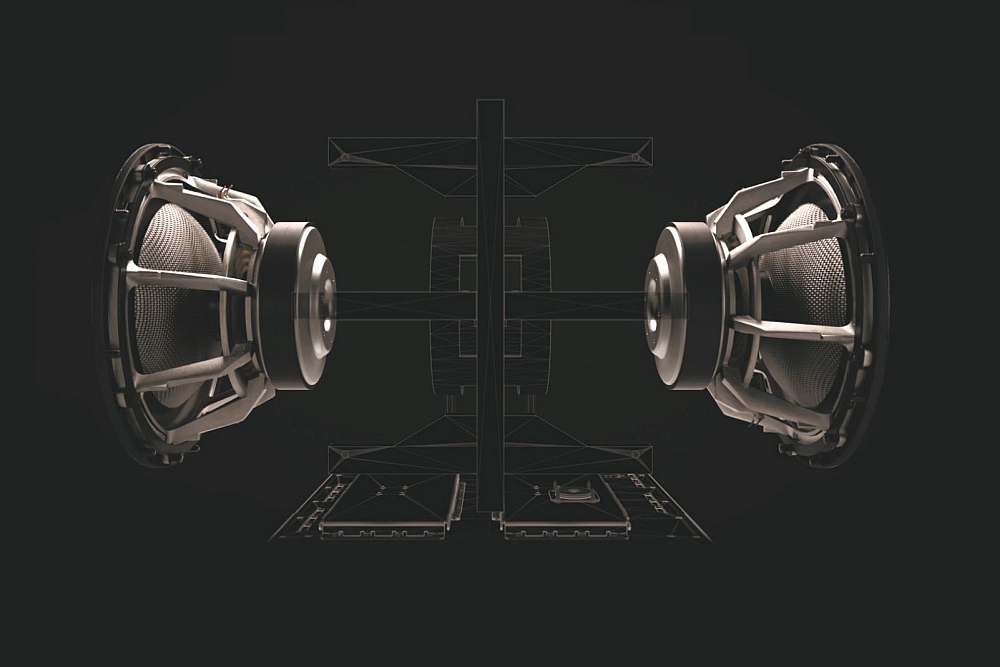 But all that is not to say that the tremendous stereo playback refinement and tonal accuracy made for a lack of impact on often-overly-bass-heavy movie soundtracks. This subwoofer can mash it with the biggest dinosaurs and the loudest explosions, in terms of sheer output, without fear or favour. When needed. And that previous sentence is the key here.

Many subs give you bass fulltime. And that always equates to too much bass. Basically, it’s a constant drone of pulse-like bass that pervades all, whether music or soundtrack. And it’s not poor integration that I’m referring to – it’s just an all-encompassing one-note bass quality. It’s inaccurate and annoyingly wearing.

So, “when needed” means that the DB2D’s substantial capabilities are exhibited only when the music or soundtrack requires it. When not needed, the DB2D is almost unheard, doing no harm and allowing the mids and highs to do their thing… to shine even. But when the requirement is there, when bass is present in the recording, whether subtle or brutal, the monster-with-the-deft-touch awakes and the slam and power can be surprising. That’s what excellent subwoofer design is all about!

To illustrate the point. During my auditions of powerhouse soundtracks in movies such as Blade Runner, Edge of Tomorrow, Mute, Fury, Orbiter 9 and a number of episodes of Fear The Walking Dead (the electronica soundtrack on this series is a subwoofer workout), the DB2D sounded extremely clean and dynamic when the demand was there – and it sure was in these examples – with the subterranean depth in Fury’s tank blasts literally shaking the walls while clearly rendering and extending the harmonic decay of metal against metal. The concussive charges and the definition in the FX tracks of Blade Runner and Edge of Tomorrow – examples being when flying vehicles zoom past – were among the best I’ve heard in my system. And as authoritative as these examples sounded, it was the DB2D’s definition and depth of detail that impressed me once again. Yet in more subtle dialogue passages, even when deep male voices were being replayed, the sub was quietly doing its low-level duties without mucking-up the wonderful midrange powers of the main speakers while vocal clarity and intelligibility were always unscathed.

The new Bowers & Wilkins DB2D subwoofer is quite the controlled beast. For sure, it makes a solid statement regarding what the entire range is capable of in terms of sonic performance, given the similarities shared in driver design (differing sizes notwithstanding), amplification (albeit with a higher power output for the biggie DB1D) and on-board digital engine capabilities. So the differentiation between this outstanding line of subwoofers would be room size and required output.

Within the context of the two monitors I had in-house, the inclusion of a DB2D would make for a near to AU$8K mains and subwoofer partnership. In my opinion based on my findings, the combination of a high quality monitor with the DB2D would present a viable option when shopping in the $12K to $15K loudspeaker range… or even at a higher price bracket. The added benefit here would also be the seamless integration offered via the DB2D’s DSP engine and the freedom to position the subwoofer in almost any location. Your monitors, in turn, can be placed in more room-friendly positions given their marginal room interaction issues when compared to large floorstanding speakers. Further synergies can be expected between the DB2D and Bowers & Wilkins’ extraordinary 805 D3, or even the excellent 705 S2 (see our review here).

There may be cheaper subwoofer options out there in this wide, wide market but your choice at this price range would be limited to a handful of units with only a select mix of the DB2D’s full attributes count. The DB2D offers excellent build quality, superb driver engineering, generous high-tech features via comprehensive DSP and App control, a pedigree based on the world’s largest speaker manufacturer (alongside a high resale value) and, of course, extraordinary low frequency sound quality. For the sum of all these things the DB2D receives my categorical highest recommendation.