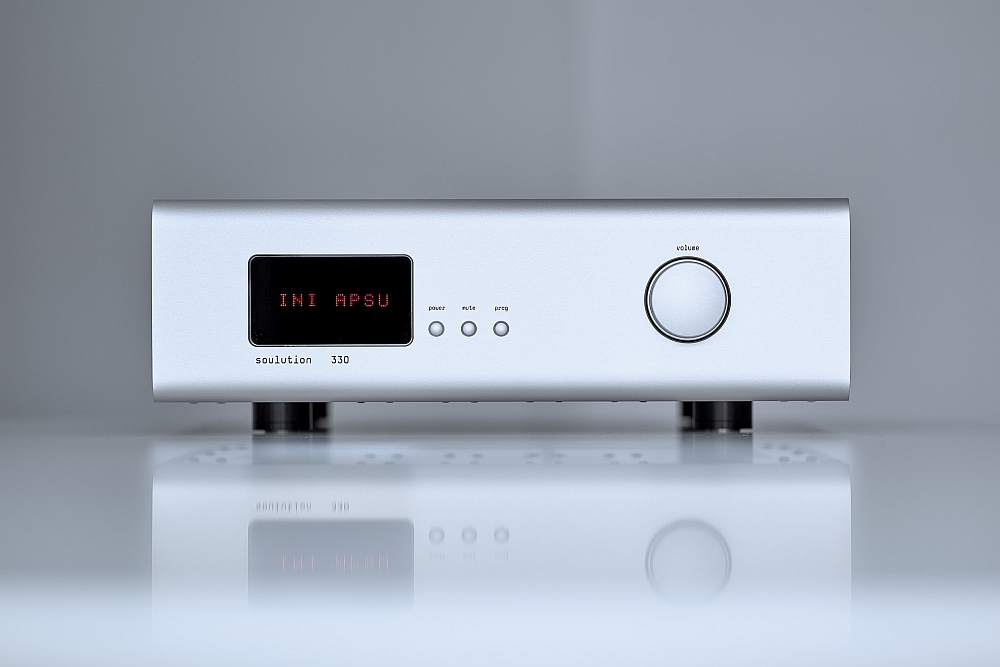 First of all, this is not your everyday high-end amplifier, DAC or Preamplifier. In fact, it's not your average anything and almost defies classification. This is an AU$25,000 entry (yes, entry as this is the least expensive Soulution unit) to the rarefied and fascinating world of Soulution Audio.

The Soulution is Clear

Soulution is an arm of Spemot AG, a trusted and well established engineering firm in Switzerland with a client list that includes BMW and VW. The majority shareholder in this company, Mr Cyrill Hammer, decided in 2005 to enter the arena of high-end audio manufacturing. And enter it he did, following in 2000 with the purchase of the Audio company "Audiolabour", along with most of its proprietary technologies and designs. The company's initial release of the massive model 700 Mono-blocks and the Model 710 Integrated was received with high acclaim and these continue as flagship amplifier products with a commensurately lofty price tag.

Soulution is an interesting brand from several viewpoints. The first being the very fact that it exists in a market already well served and bristling with almost any combination of technology, engineering and design. Not to mention the plethora of astronomically priced and designed audio jewellery that also panders to the ego and wallet (sometimes in lieu of the ear). But of course, everything has a market and if it sells, hey, who are we to judge?

Soulution has taken a somewhat isolated route with both their external and internal designs. Externally, it's all matt alloy and fasteners. But then you look more closely and see the attention to detail along with the heft and quality of materials. Previous models have actually won design awards for their cleanliness of line and minimalist appearance. The thick casing features a gently rolled edge at the front, with clean lines leading back to a conventional rear panel. Fittings are likewise high grade and beautifully finished. Front panel controls are few, with emphasis instead on multi-function for each control. The overall impression, at first glance, is one of restrained technical expertise. Form definitely following function, with no heavily contrasting materials, or glossy finishes designed to draw focus from other areas. 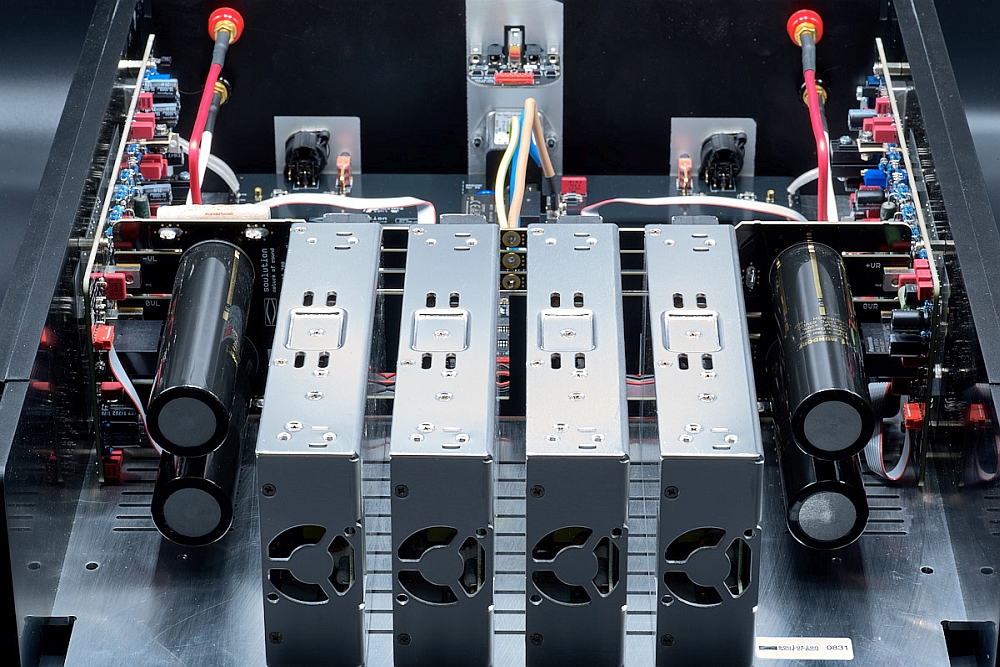 Internally and technically, the Soulution 330 eschews conventional design and history. Instead relying on multiple power supplies, four of them even being ‘switch mode’ design! These are used, along with extremely low global negative feedback, to ensure a stable and resilient power source for the amplifier. The sensitive power supply to the DAC section however, remains a traditional linear power source. A large 160,000 microfarads of capacitance for the amplification makes sure there is never a shortage of supply, when called upon for those micro and macro detail duties.

With a claimed bandwidth of 0-800 KHz (-3dB) and a damping factor of 5000, the Soulution 330 is at the forefront of circuit design and pushes the envelope where current thinking is concerned. And yet, it's an obviously well thought out, well designed and heavily refined piece of technology. This is no fly-by-night organisation with a limited lifespan and a gone tomorrow attitude towards technology.

The Soulution 330's rear panel is conventional in appearance. Inputs are two of the common line in unbalanced RCA type connections along with two of the balanced/XLR types. An optional phono stage is available while the DAC module with network/streamer function is slated for imminent release. Power output has been quotes as 120 watts at 8 ohms and 240 watts at 4 ohms with 30 amps of maximum output current. The volume control’s gain is adjustable between - 66 to + 36 dB. 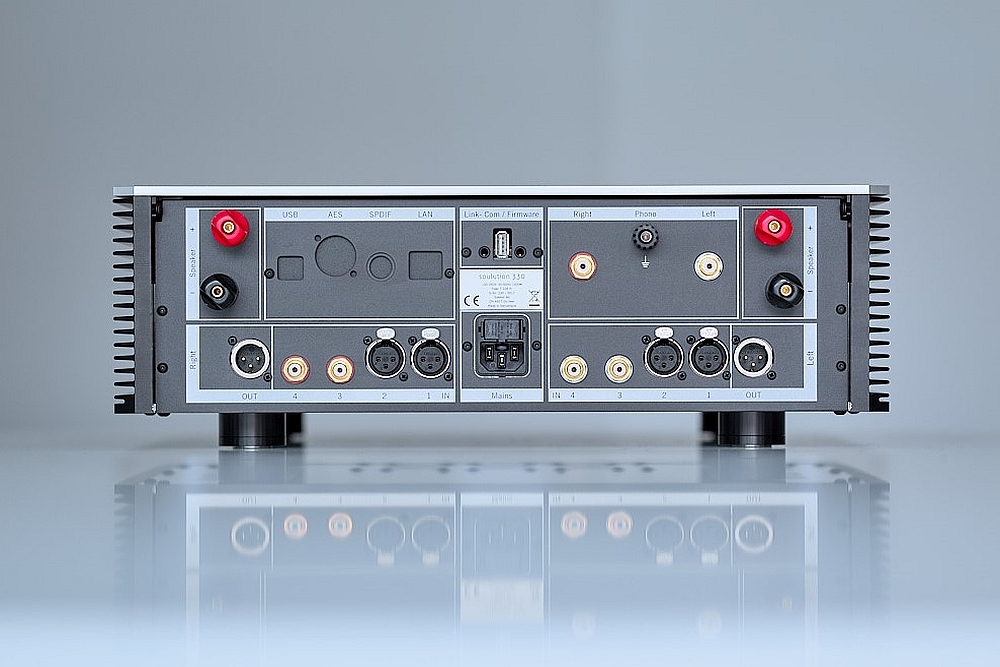 The front panel is sparsely populated, as mentioned previously. There's a large round knob control to the right, three buttons for power, mute and program, along with the large clear LED Display on the left. That's LED not LCD, meaning the display can actually be read clearly, even from several meters away. The characters are large and well spread out, so you can see what you're doing with the large, hefty remote. This remote is the heart of the system and allows control of virtually all functions. Most interestingly, the Soulution 330 is intelligent enough to switch between sources and outputs while maintaining a constant volume, but also automatically brings the volume down to a safe level if needed.

Naturally, ‘Experienced Audiophiles’ never, ever, make the mistake of not muting or powering down devices before making or breaking a connection... but just in case, the 330 has your back. It also defaults to this level on power up, remembers what you had connected and where, as well as remembering all your default settings.

But this functionality and circuit technology is not "difference purely for the sake of difference". Rather, there's a passion here to push the idea of what's actually possible, while still remaining cognisant of electronic history and learning from it. This is evidenced by Soulution’s use of Mundorf and Evox Capacitors and silver wiring where needed, along with transistors and resistors from both Analogue Devices and Burr Brown.

It's certainly powerful. It had no problems driving the MartinLogan Summits I used in this review. Even in the higher frequency range where the panels drop down to punishing impedance levels, it sailed through without fuss or stress. The twin 10 inch bass drivers in each of the Summits is taken care of by two dedicated amplifiers per cabinet, for a total of 400 watts. But (and nobody can explain why) the "character" of the bass changes, depending on what amplifier is supplying the signal. Best I've heard on the bass of these speakers are the Hypex Class-D modules, but they were not enjoyable on the panels. Second best was the Soulution but this amplifier also carried the quality over to the sound coming from the panels as well.

In fact, these electrostatic panels are some of the most revealing I've heard. So as well as providing a great test of an amplifier’s ability to drive difficult loads, they also give a very clear idea as to its midrange and high frequency prowess. 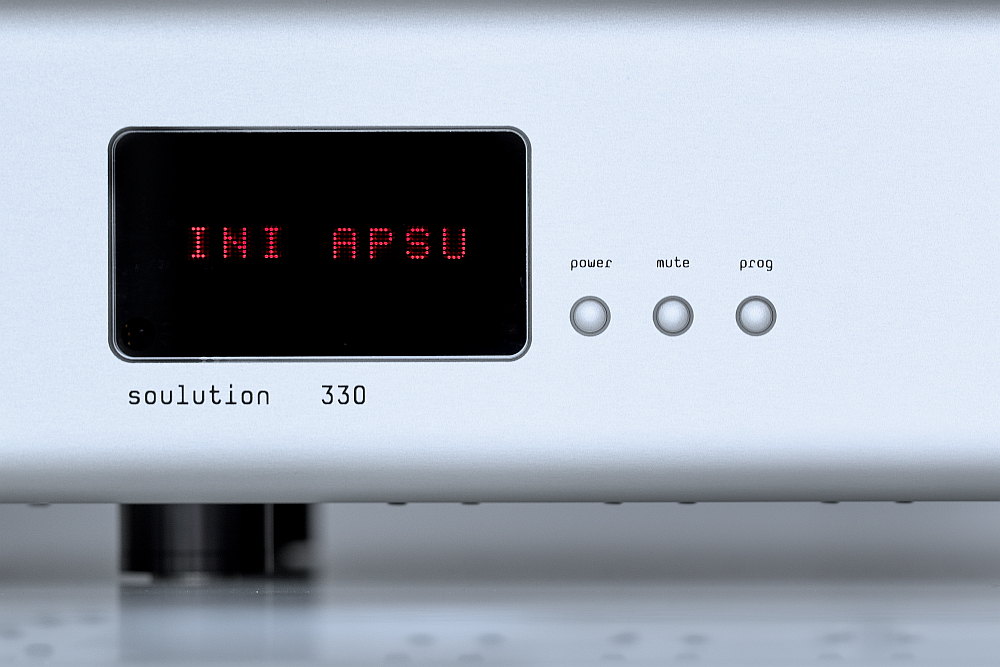 On Stockfish Records’ Closer To The Music Vol 2 the first two tracks are from Sara K. Track 2 is the well-known "Set You free". In it, Sara's voice approaches piercing levels and that, together with electrostatic speakers, can sometimes become very strident and forward. The Soulution 330 refused to let this happen, even at higher than normal volumes. In terms of body and tone in the mid-ranges of Sara's vocals, the presentation was soft, intimate and clear. Macro details were preserved and could be heard clearly in the recording. The musicality was spot on, along with the natural rhythm and cadence of the lyrics.

I was recently lucky enough to come across a collection of recordings from Sheffield Labs, Chesky and JVC XRCD. I'm slowly working my way through these and one of the first pulled out was from The Audiophile Reference Series, titled Sheffield Drive. According to the sleeve, this album was "specifically created to introduce the award-winning Natural Sound of Sheffield Lab to car audio enthusiasts."

Track 4 "That's Not Me" is from Michael Ruff's Speaking In Melodies album. I've used it most recently for dynamic contrast testing, as well as it being a great example of deep and large bass notes. Not only deep, these bass notes at about 3:22 on the track are tight with no overhang and with a very fast attack. The Soulution 330 had little problem with these and displayed complete composure in reproducing all the impact that was on the recording. On the same track, there are several places where the instrument and singer move within the sound stage. This comes out as ‘clouded’ with some equipment – it’s there, but not that clearly. In this case, I could follow the movements easily, even when the saxophone and vocalist crossed paths. In fact, this is about when I began to realise that the Soulution 330 is far from the usual crop of high-end powerful amplifiers. While it equals in every case the power, performance, resolution and tonality of its competitors, it also has a certain something that places it above these offerings. 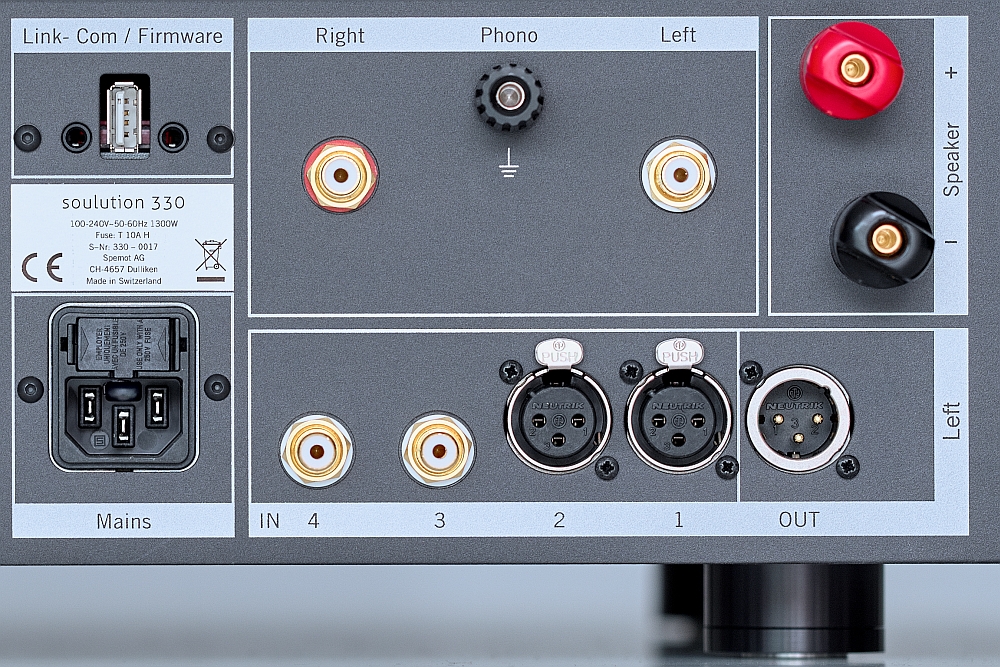 For the first time in a while (at least the last couple of years) I found myself continuing to play music, long after I'd finished making my notes. There is an "engagement factor" present with this Soulution amplifier that is often absent in modern amplifiers, solid state, valve, Class-D or other. Technically, and indeed musically, these other examples are extremely competent. But there's no ‘special sauce’. There's nothing to make you wonder just what you're hearing that's so different and just how it's being made to sound that way. Is it the components? The cables? The room? The recording? Or some random combination of the above?

I swap a lot of gear in and out around here; always have and probably always will. It's just what I like doing, but it also gives me a sense of which components are going to work well together. So, I put together the best of what I had available and played the whole album, the Sheffield Lab "Drive" Album mentioned above, with the Soulution 330 in place. I then removed the Soulution and replaced it with my current favourite solid state amplifier, which is no slouch in any area and amongst the best I've heard in many. To butcher a cliché, if I may "it was like lifting a blanket on and off the system" albeit a very thin and transparent blanket. All the usual things were done beautifully by both amplifiers. All the "audiophile" cues were there, along with the musicality and tone to make both extremely listenable.

But (and it's a big "but", this one) the Soulution was able to offer a closer, more intimate, more emotional connection to the music. Not in such a way as to make my other amplifier unlistenable or anything near it. But it did make me wish for the money to own a Soulution. Other Soulution owners I've spoken to report similar feelings, so it's not just me. Most of them have the money to indulge at this level, but others have done their homework, then saved for some time to buy Soulution equipment.

I'm sure most will put this down to the infamous "law of diminishing returns" that's oh-so-very-prevalent in audio, as it is in many other hobbies. But having researched Soulution thoroughly for this review, I believe these guys are the "real deal". They're very obviously passionate about music and its reproduction. But they appear to be equally passionate about pushing the frontiers of technology in order to achieve their goals. It looks to me like they have the brains, the (financial) brawn and the will to do just that.

The Soulution 330 is a superb example of the integrated amplifier craft. I'm expecting big things from Soulution in the future and am very curious to see what's next from this Swiss wizard.