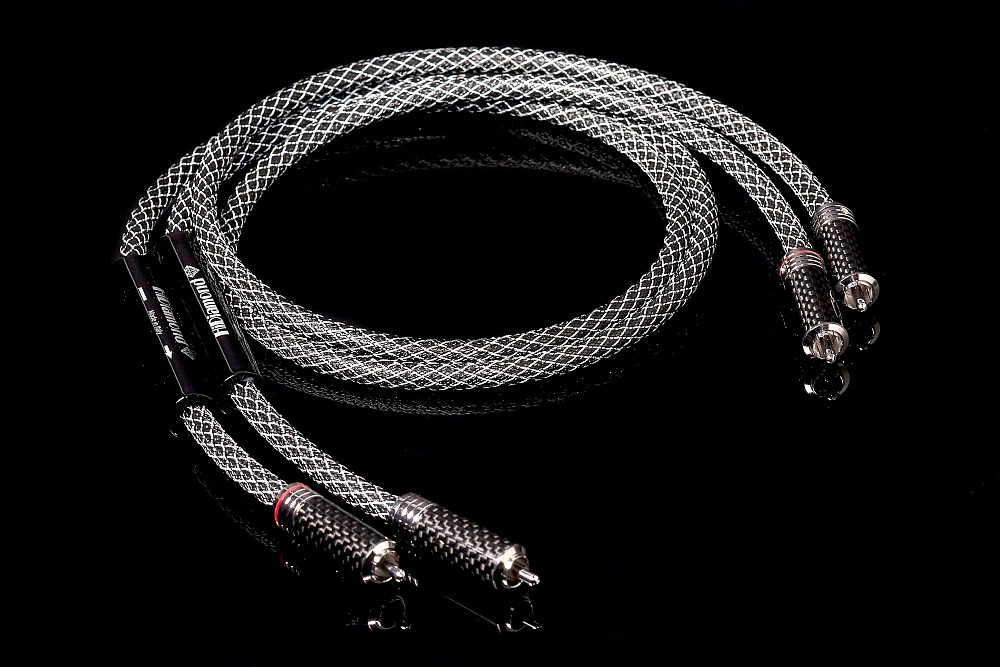 Audio cable prices continue to sky rocket with statement pieces often costing as much, if not more, than the rest of a music system combined. Competing technologies continue to proliferate at a rate matched only by often garish advertising and boastful claims of patent (-ed) superiority. Cables are, of course, a crucial means of transferring those precious signals from your source to your speakers but are so system dependent that reviewing them causes me some trepidation in seeking to do so.

At the same time, it is always cool to be pleasantly surprised. I was previously unaware of the Italian HiDiamond brand or their price structure. When opening the neatly packaged boxes containing the D7 RCA interconnect, the top-of-XLR-line D3 balanced interconnect, and the D7 speaker cable, I was greeted by glitzy cable jackets in very shiny and thick silvery-grey livery which led to me to expect very high prices and a bombastic, in-your-face sound. The D3’s connectors are even adorned with Swarovski crystal that, to me, could have walked straight off the latest Valentino cat walk or Bowie’s get-up on the inside cover of Aladdin Sane.

I couldn’t have been more wrong. In my system, and when seriously burnt-in (I’m talking at least 500 hours) these cables distinguished themselves by a relaxed and even-handed neutrality and subtlety that belied their showy outer appearance. The HiDiamonds have a natural ease and lack of restriction, a spaciousness and free flowing musicality, a freedom from artifice and an honesty that belies what I now know to be their very reasonable prices. These cables are no mere variable “tone controls”. And truth be told, they do actually look more acceptable in situ than when first removed from their silk wrapping.

Established in 2000, HiDiamond operates from the Roman city of Anzio. The company has since grown to what is said to be the largest and most important manufacturer of high-end audiophile cables in Italy, winning numerous European awards along the way. The company’s principals are Dr Salvatore Filippelli, who has been the Italian managing director of Nextream, a company owned by the Thomson Electronics Group, and Julian Pompili who has experience in aerospace and telecommunications and has worked for such global companies as Selex, Marco Telecommunications, and Boeing Industries. HiDiamond is no DIY ‘garageland’ cable manufacturer but rather produces with a high level of industrial sophistication, design and quality control. Check out the HiDiamond website for further proof and technical information. 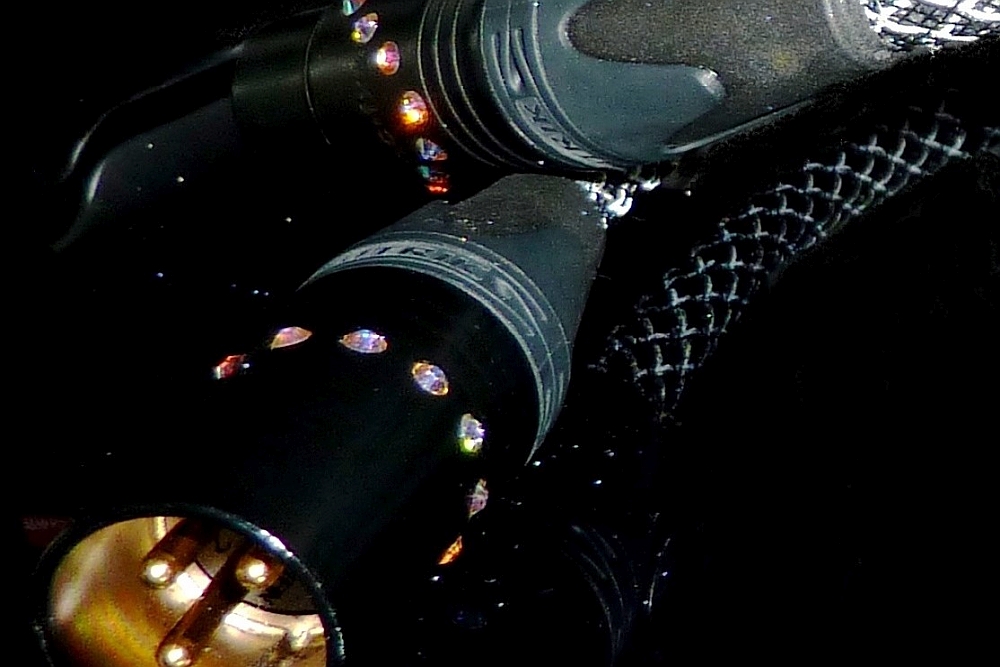 For Salvatore Filippelli, cables are “usually considered accessories, but we define them as pieces of apparatus”. The “purity of the source material of the cable is decisive”. So, at their core, the HiDiamond’s use mainly pure copper alloy as a conductor material:

The copper we use differs remarkably from the usual. It comes “cooked” four times, at various temperatures. Each time it is carried to a constant temperature, the copper becomes “cleaned up”, and is finally carried to a purity near 100%. The temperature of the last “baking” is very close to the melting point of copper, to eliminate the final impurities that are the most difficult to remove. The higher products in our catalogue [such as the D7 and D3] use a mixture of copper and graphite that cancels noise generated in the cable. This translates to an extremely neutral and musical cable.

HiDiamond call this new and exclusive procedure “4VRC” technology as distinct from the more common twice cooked 2VRC method (the company's Genesis line uses 4VRC999%AG). The stated benefit of using 4VRC is to reduce the inductance, resistance and capacitance of the cable thereby improving the linearity of the signal transfer. 4VRC also affords HiDiamond “an increase in both the spatial, transparency, precision in the high register of frequencies, a greater separation of the instruments, with an absolute black and a speed of execution that we could ever imagine”.

Significantly, HiDiamond uses alloy as its conductor material rather than just copper, silver or gold conductors or plated combinations of the same sourced from OEM manufacturers. All manufacturing actions related to this conductor material treatment (including drawing, cleaning, the spiral geometry and the like) are done by dedicated professional industrial machines commissioned locally by HiDiamond to ensure consistency. In order to reduce skin effect, HiDiamond interlace the conductors and prefer shielded cables to again minimise electromagnetic interference. Rather than the standard Teflon, they use XPLE (cross-linked polyethylene) for its dielectric because, says Filippelli, “for audio uses, this dielectric/ insulator has demonstrated 100 times better performance than Teflon, giving a fantastic linearity to the musical message. The amplitude of the phase is remarkably lowered, and the sound is much better delineated.”

The distinctive outer sheath with its diamond-like interlaced network has a very dense texture to provide immunity from electromagnetic interference but is also quite flexible which is a commendable and very useful achievement. The D3 and the D7 speaker cable come in two different but complementary shades of (sparkly) grey for each channel. Again a neat and functional design touch. 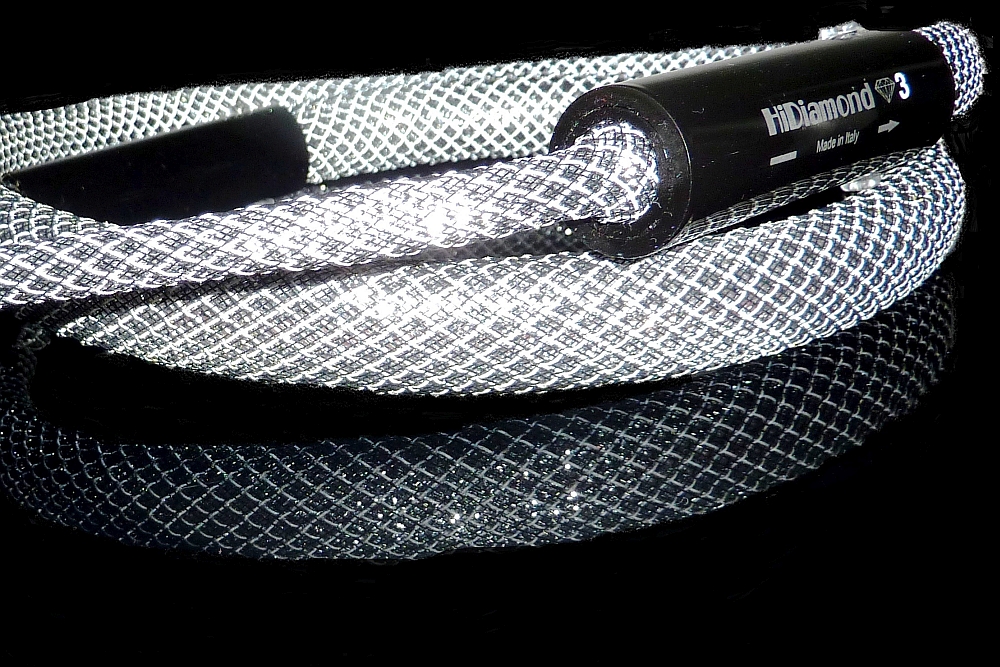 The HiDiamond connectors are extremely well made and work like a dream. The D7 interconnect sports custom made Rhodium plated locking RCAs housed in a carbon graphite jacket. The D3 has Neutrik silver (and Swarovski crystal bling), while the D7 speaker is available in either spade or banana. All solder used for the cable connections is at least 4.2% silver. Each cable also has a black-cased direction indicator because the directionality of the cable “is an important factor in nearly all cable constructions. Orientating crystals within the cable improves the current passage, obtains better electrical values and better speed of propagation, all of which translates to greater equilibrium”. Finally, as Filippelli recognises, and as I not quite so soon found out:

Burn-in is fundamental, especially for the cables that use graphite, which need many hours to align the “pins” inside of the cable. Moreover, it takes time for the crystals to polarize, to create less friction to the passage of the current. Graphite cables must be excited for many hours before they can carry out the greatest reduction of the noise generated by the cable. For our cables generally, it takes 40 hours to 100 hours of burn-in.

Well, respectfully, with a Cable Cooker maybe… Listener be patient though, it’s worth the wait.

Although each cable was tested individually, I treated this “apparatus” as a cable system as an integral part of my audio system.

Contrary to my initial expectations, the HiDiamond loom transmits whatever the musical message with tremendous subtlety, coherence and understated refinement. Always natural and highly musical, the cables surprised in my system, be that valves or solid state, with a fast, clean and really very open and spacious presentation. It was as if the audio band had been broadened (liberated?) at both extremities of the frequency spectrum.

There was none of that typical coppery sound. The HiDiamonds are neither overly full, nor overtly warm, never smothering or homogenizing detail and differentiation in order to achieve richness and tonal density. The cables are highly revealing of poor recordings but are never as thin, edgy, or as fatiguing as some silver cables can be. I can really enjoy Superfuzz Bigmuff by Mudhoney without the fuzzy sonic mud of some other cables, honey. For whatever reason, I have rarely had to adjust the volume for each individual recording with such alacrity as with the HiDiamonds in my system. They are smooth, precise and accurate but are neither dull nor analytic bright, never harsh and aggressive unless that is in the music itself. 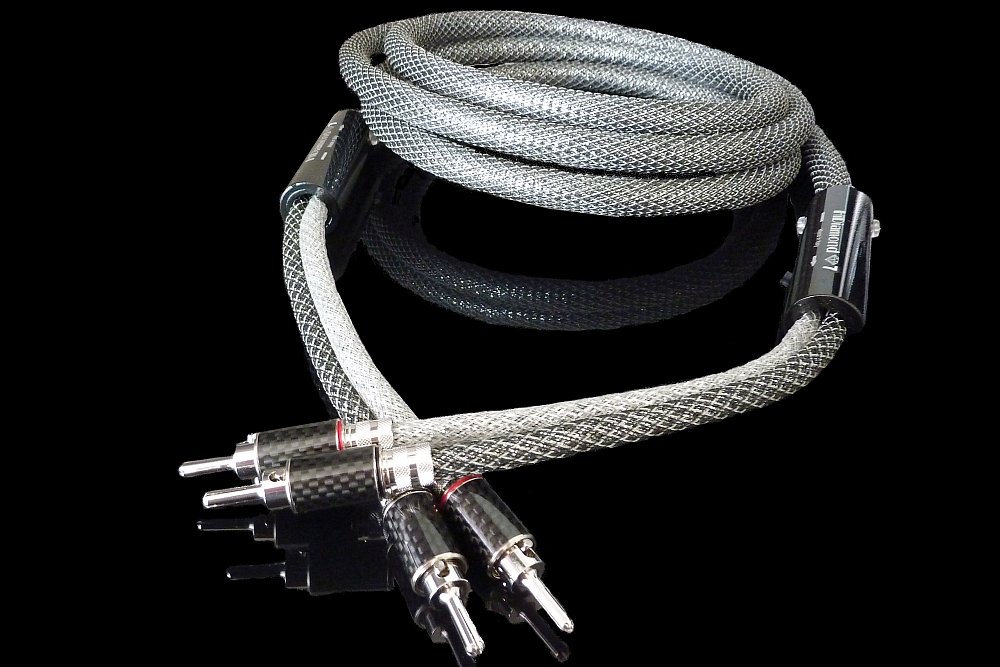 I was tempted to lead off with Bowie’s Diamond Dogs but he should never have sacked Mick Ronson at that point. Instead Sugar’s sprightly Copper Blue comes off the player with surprising scale, drama and consummate emotional power. Through the HiDiamonds, dynamics especially are just extraordinary. Perfect to convey this musically compelling and impactful recording. Bob Mould’s voice chokes and strains at times but the system doesn’t. The sense of liberation from dynamic compression is remarkable. Instrumental separation is equally stellar. As is instrumental size and differentiation. Bass is perhaps slightly lighter in weight compared to the denser midrange, more so because of the D7s methinks, but not in extension, pitch, control and inner detail. The music simply flows and – and punches – with natural ease and clarity. Transient speed and resolution are also first rate as is rhythmic dexterity and forward propulsion. The HiDiamonds are lively and exciting notwithstanding a sense of characteristic relaxed, natural ease. Nice for the asking price.

The HiDiamonds are not clamorous sounding cables. Slightly light and airy in overall tonal balance, they major in top to bottom coherence and transparency with a richness of textural information and particularly realistic harmonic detail that suits amplifiers like the SPEC to a tee. Nels Cline’s masterly use of the tremolo bar on Wilco’s “Impossible Germany” is exquisitely rendered in a way that I’ve never heard or so appreciated before. You feel every little movement of the tremolo springs, sense every deft touch of the hand on the bar of that beat up old Jazzmaster, hear every slight variation in volume and the resulting tonal colour, shading and fresh micro-dynamic insight is just unforgettable.

The treble is no less impressive. It is clear and open, extended and detailed. Ambient retrieval and depth perspectives are exemplary. Check out Keith Jarrett’s “European Quartet” on Sleeper for instance. Jarrett’s yelps are committed deeply and are deeply committed. Imaging is focused, holographic and vivid enough. Spatial information is again natural and accurate. The whole presentation is immersive, completely and emotionally intelligible and involving. The piano convinces with rich, lifelike tone and precise placement and contrasts readily to the sometimes sharp tone of Jan Garbarek’s sax. The air of and around the performers is beautifully rendered. Once again, and just as importantly, the music and the system bringing that music back to fresh, vital life, is allowed to breathe without sonic restraint through the HiDiamond loom.

Towards the end of the review period, the D7 RCA had to go back to the distributor – an eager customer was anxious for its inclusion in his system. Its absence from my system was immediately and palpably noticeable. I particularly missed its energetic liveliness, its sense of dynamic freedom, its expressive articulation and purity. It was only then that I learnt of the prices for these HiDiamonds and my admiration for their sonic capabilities – and their significance in the overcrowded marketplace for high-end cables – grew even, umm… higher. 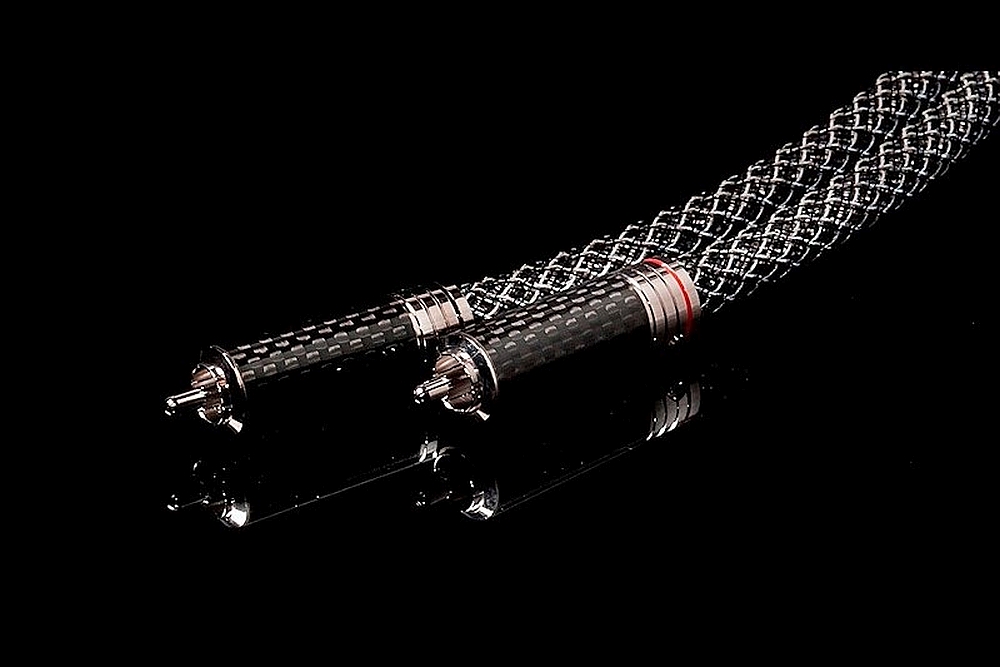 Notwithstanding their somewhat ostentatious appearance, the HiDiamond cable loom in my system sounds anything but. These are genuinely cables that are heard but not felt for all the wrong reasons… they disappear sonically without drawing undue attention to themselves. Sure, the bass could be a little weightier but that bass is still tight, satisfying and authoritative. There could be more detail. There is possibly a slight boost in the upper mids which no doubt enhances vocals and presence region instruments but the remarkably-even balance otherwise achieved by the HiDiamonds across their very broad frequency spectrum is really rather impressive. So too is their characteristic sense of relaxed, natural ease and fresh, free-flowing dynamics.

The HiDiamonds then are no mere tone controls. These are genuinely high-end audio cables of quite reasonable prices that, in my system, can be used with relatively consistent results across different components, a testament to their essential neutrality and musicality. And a testament to their fundamental linearity and honesty. ‘Where Diamonds are Halos’ sings Sugar on the Deluxe Edition of Copper Blue. This is so true here. The copper HiDiamonds shine on with affordable excellence.