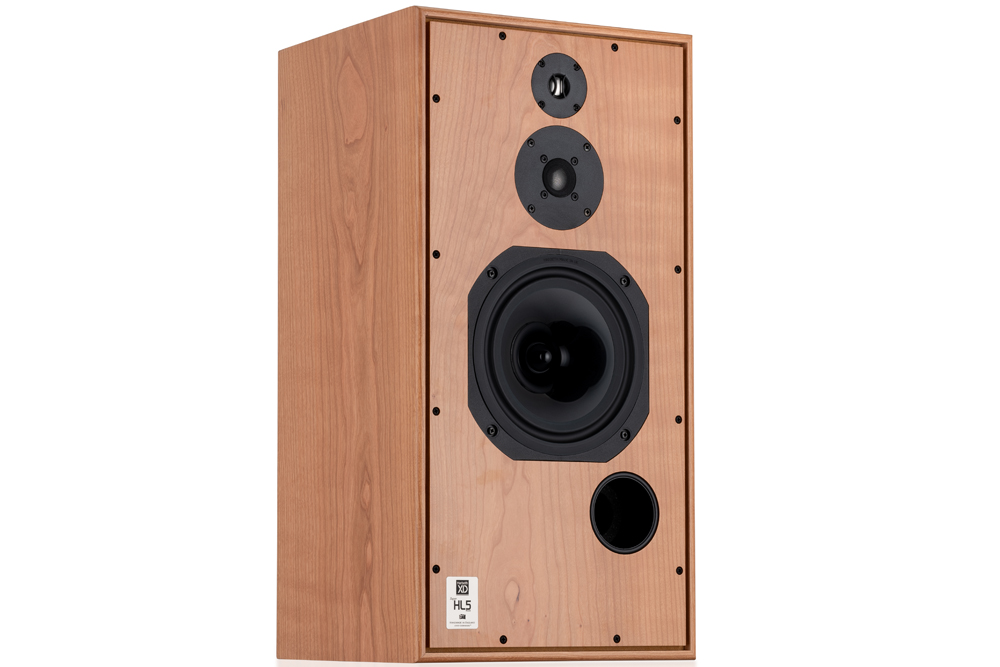 Some people might say that the Harbeth Super HL5plus XD speakers look ordinary, perhaps because they don’t have curved sides, chromed bits or some other fashion or fad of the hi-fi world. Well, yes, they look as ordinary as the Parthenon. Some might even say that they are not exciting, perhaps because they use no ribbons, horns or other trendy technology. Well, yes, they sound as un-exciting as Pavarotti. That’s because dispensing with those distractions, Harbeth has been creating loudspeakers (such as the SHL5plus XD for review here) that are becoming synonyms for British design, British reliability and British quality.

I doubt that these speakers could look more classic than they do, so much so that if you’d send a layman to “buy a pair of hi-fi speakers”, he would be quite likely to come back with something of their size and proportions. They do look as you’d expect speakers to look on the first photo of the corresponding encyclopaedic entry, but that’s far from being any kind of an issue. Reinforcing this strong classical feel is the fact that in imperial measures they are along the lines of “foot by foot by two”. In other words, like a BBC standard.

The pair I auditioned had a cherry veneer and there are other real wood finishes available to make sure these speakers blend well into your listening environment. As per the general guidelines for things classic and standard, they have a cloth grille at the front that can be removed if you want a more detailed sound or if you prefer a more revealing look. Around the back you’ll find just two binding posts; no bi-wiring, no bi-amping, just good minimalist connection.

The quality of the workmanship is evident from the moment you set eyes on these speakers and that perception is reinforced even further when you touch and handle them. Every surface is flawless, indicating that you indeed got yourself a high quality product. With the grille off, you can also enjoy a view of drivers which impress with their build and attention to detail. 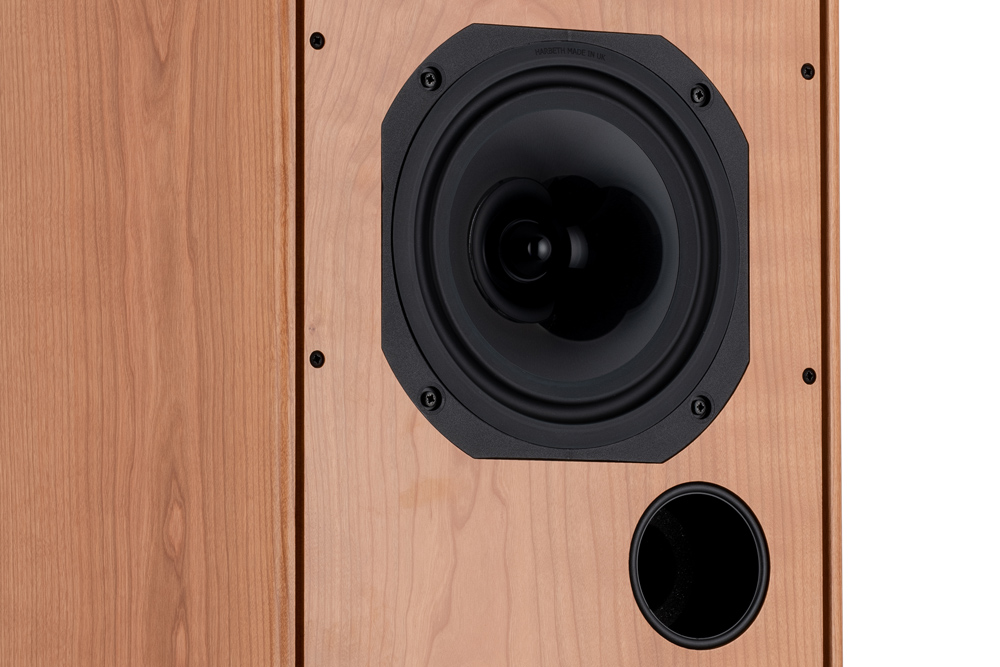 Harbeth’s specifications for the SHL5plus XD state a frequency response of 40Hz to 20kHz at +/- 3dB (free space measurement). A 6 ohms impedance and 86dB efficiency (2.83V/1m axial) make the SHL5plus XD and easy speaker to drive.

Harbeth does not provide any speaker stands, obviously relying on a plethora of stands available on the market. I used a pair of old stands that in the end did the job after some experimentation with various positions and mounting options.

My listening room is 4m wide and 3.7m deep (a.k.a. “sideways”), and the distance between the central listening spot and each speaker is usually about 2.5m. A number of geometrical irregularities in the room dampen the standing waves and deliver pretty good acoustics with a reasonably flat frequency response. Most speakers I’ve tried perform very well in this space and Harbeth’s SHL5plus XD were no exception.

First thing first – a warning. When you hear these speakers for the first time, you might also hear a voice in your head solemnly and sonorously proclaiming: “Thou Shalt Need a Sub…” Please resist the urge to connect a subwoofer straight away. My recommendation is to first give your Harbeths a few hours of break-in and only then you might want to involve a sub if you still happen to crave more rumble. In my case, a few hours of power-break-in (speakers wired in counter-phase facing each, closely-positioned, mono signal from the amplifier) gave the bass a considerably deeper floor that alleviated the need for a subwoofer for most tracks. Low frequencies were still somewhat less pronounced than what I’m used to but not much, and Harbeths generously compensated for that by delivering a tightly defined bass with precise soundstage positioning. 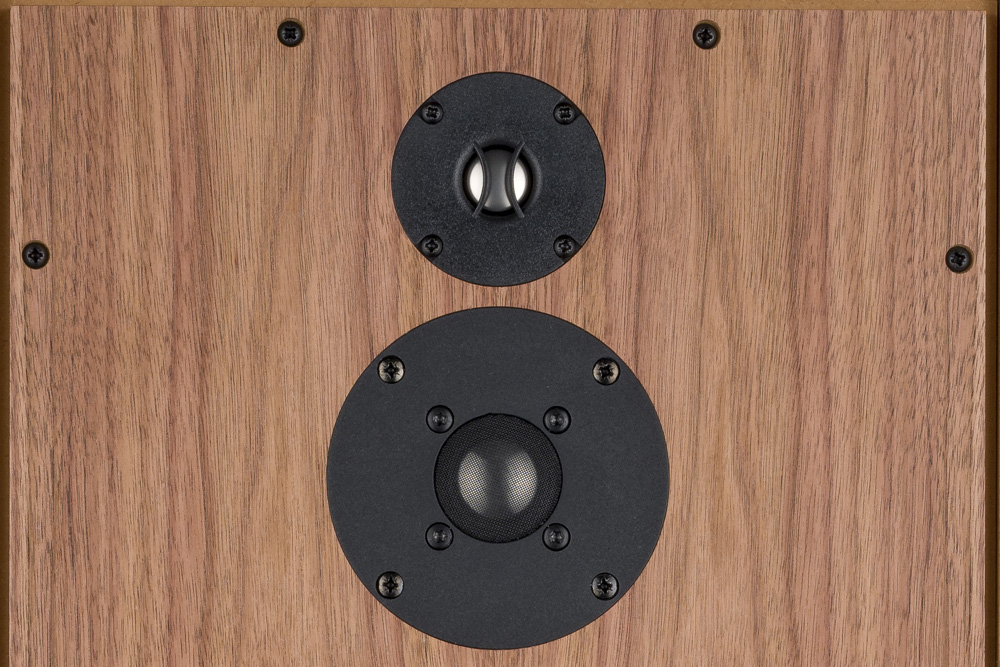 My second warning is about the amplification. Please do not bother with anything that has less than 100 watts per channel at 4-6 ohms. It’s just not worth it. I tried and failed miserably, with confused sound of the listless kind. The SHL5plus XDs’ true nature was fully revealed when they had a 350 watts per channel at 4ohms amplifier behind them, one that was more than comfortable driving the 6 ohms load. With that amplifier, in addition to lively dynamics, there was a notable absence of perceptible sound coloration apart from just a hint of added warmth in the mid and high ranges when the front grille was on. This actually came in handy when playing old vinyl, because slight cracks and pops got dampened by the grille. With the grilles off, Harbeths’ tweeters (for better or for worse) enthusiastically revealed even a slightest hiss in a recording and unmasked some craftily-concealed noise in my hi-fi chain. Once the offending component was repaired, the SHL5plus XDs confirmed the successful rectification of the problem. Good work!

Just for the sake of it, I also connected these speakers to a rather cheap and very ordinary home theatre AV receiver and, although the sound produced was predictably of a lower quality, the difference was not as pronounced as I expected which indicates that SHL5plus XDs can be quite tolerant in this regard and that heir impedance presents an easily manageable load to an amplifier.

Out of the whole audible spectrum, the SHL5plus XDs impressed me most with their masterful reproduction of midrange frequencies. These speakers are in their true element when playing classical music; especially chamber orchestras and, perhaps to a slightly lesser degree, symphonic works. They prefer jazz to heavy metal and they absolutely love both female and male vocals. It was a special treat to hear Joan Baez’s voice in “East Virginia”, from her 1960 album Joan Baez, regardless of whether the source was an LP, CD or a streaming service. Particularly in the upper ranges of her exquisite voice, while her guitar had a most impressive presence and pluck.

Harry Belafonte’s “Jamaica Farewell” from Live at the Carnegie Hall was equally striking, with an added benefit of a wide soundstage and a faithfully reproduced atmosphere of the live recording. 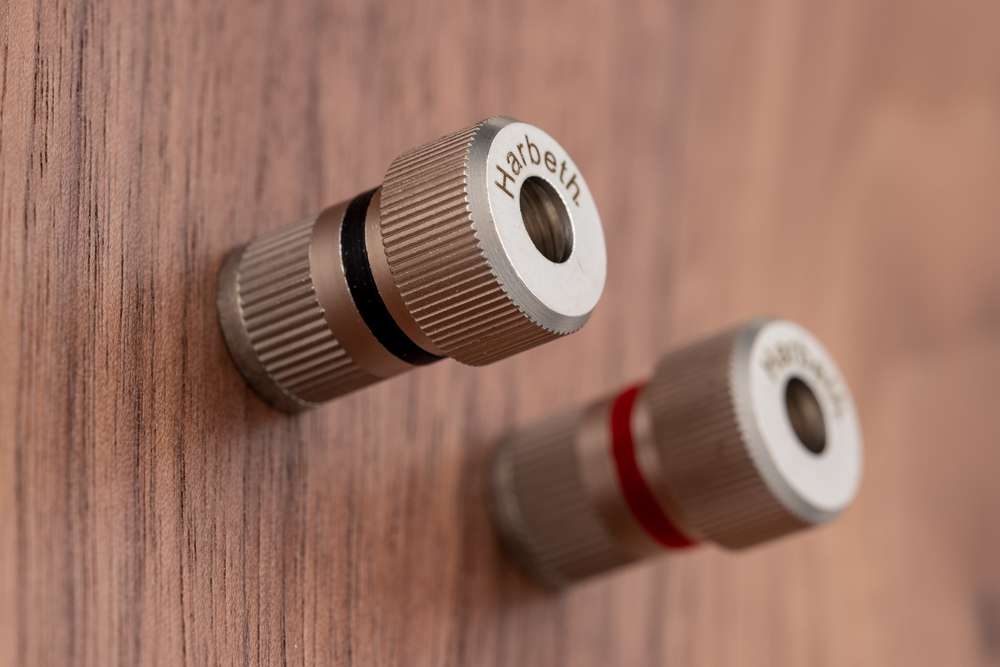 For the next example, I won’t bother you with alphabet soups or pronunciations. The link is: https://tidal.com/browse/track/84724069 (Referring to track 4) and please don’t bother yourself with any translation. The language is so archaic that even most native speakers struggle with quite a few of the words. The SHL5plus XDs, nevertheless, revealed the full splendour of the sound and the energy of the small choir (a.k.a. “klapa”) that produced it. The Harbeths even managed to successfully deal with occasional peaks in the recording that were caused by the sudden proximity of the microphone to an undisciplined (individualistic?) choir member, which is a very tricky thing to achieve indeed. Well done!

I was also very impressed with Harbeths’ expansive, accurate soundstage, albeit with one surprise discovery. The soundstage was very precise in the terms of left and right, while admittedly it could well be the acoustics of my room, I noticed that the soundstage itself appeared to be condensed into a narrow vertical plane about one metre behind the speakers. In other words, I could not discern any significant depth of the soundstage. This prompted me to experiment a bit in regards to speaker positioning and orientation. After a number of combinations tried, I can report that in the context of my room the soundstage was at its most accurate when speakers were placed 1.7m apart (centre to centre), 2.6m away from the central listening position, mounted firmly on 75cm stands that had spikes going into the carpeted floor, toed in about 10 degrees. However, the soundstage still very much remained within this one vertical plane.

Personally, I did not perceive this lack of ultimate depth as a major issue because the SHL5plus XDs created a very precise soundstage that effortlessly expanded well to the left and right of the speakers. For example, my soundstage go-to test is “Fantasia” form the album Friday Night in San Francisco where the challenge is to clearly resolve three guitars on the stage. Harbeths did this with ease and produced an impressive, rich soundstage that covered the whole width of the room.

I might be over-generalising here but all box speakers I’ve come across have added a little bit of their own personality to the overall sound. In a very minuscule way, Harbeth’s SHL5plus XD conforms to that rule but the-pleasing nature of the sound that was coming out of the speakers enticed me to listen to them for hours and hours. I never got tired of that particular activity. Even some old bootleg tracks were fairly listenable with Harbeths in the chain!

Harbeths reproduced the sound of the string quartets and quintets almost perfectly, with every instrument in its place in space and in the audio spectrum. There was a realism that included clearly audible “breathing” of the bows across strings, such as in Schubert’s String Quintet (D956) by the Artemis Quartet (with Truls Mørk). Although there was some slight volume reduction in the lower frequencies, a twist of the bass tone control brought most of them back. 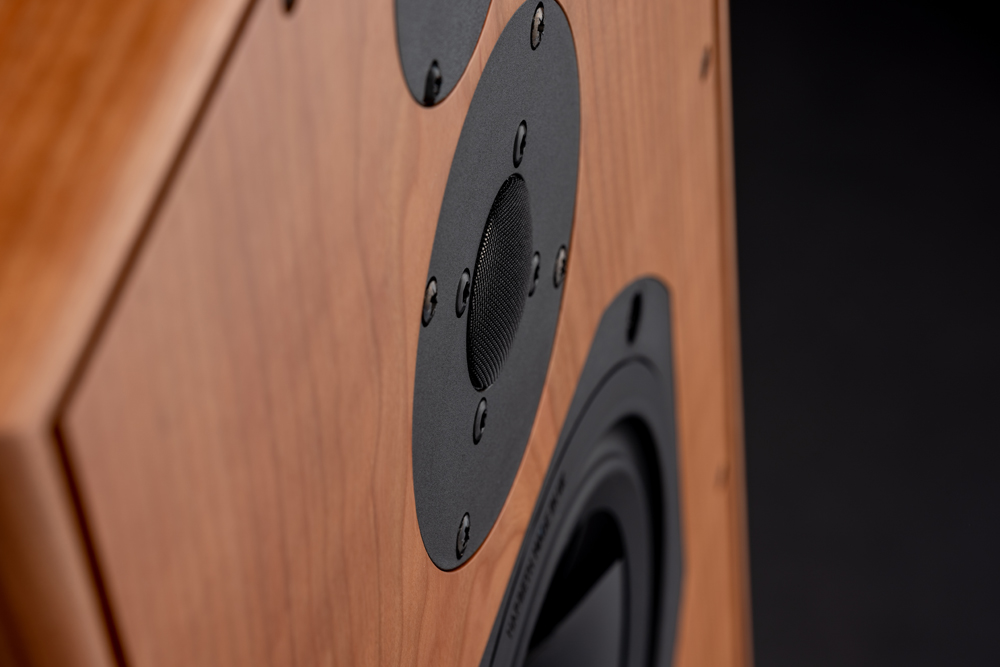 Organ music, on the other hand, did require a subwoofer, as did symphonies, hard rock and electronica, but we’re boldly stepping into the “irate thy neighbour” territory here, unless if you happen to live on a country homestead.

As for the high frequencies, it was immediately evident that the Harbeths (re)produce ample transients and harmonics and deliver a lifelike sound experience of uncommon clarity. When the grilles were on, the sound was just a tiny bit mellower, but that did not reduce the crystallinity and immediacy of cymbals and triangles, such as in Smetana’s “Vyšehrad” from the CD Má Vlast by Rafael Kubelik and Boston Symphony Orchestra, produced by Deutsche Grammophon. I’m happy to report that I never had to reach for the treble tone control and that I never came across a quality recording that sounded harsh or sibilant on the SHL5plus XDs while retaining the recorded details and dynamic slam.

Just as a great wine can be paired with a variety of food, Harbeth SHL5plus XD speakers perform well with many types and genres of music. Of course, that some pairings will be more seamless than others but, in this case, you can be pretty sure that whatever music you feed them the resulting sound will be an equivalent of a celebratory banquet. And just as fine food on the table sometimes necessitates the addition of a big roast in order to satisfy some appetites, Harbeth SHL5plus XD will occasionally prompt you to turn on the subwoofer. 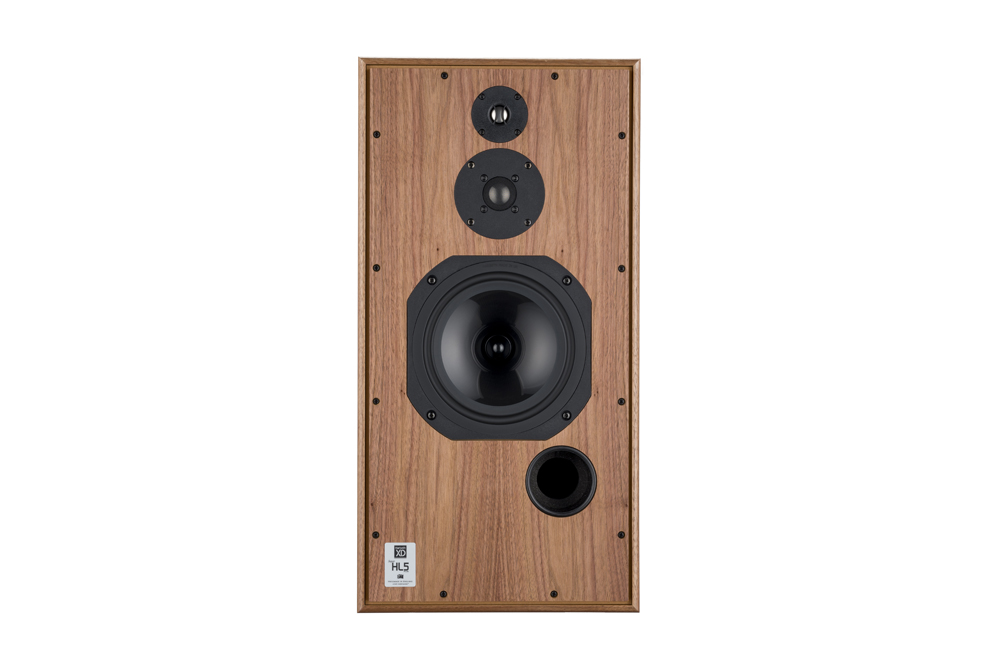 With the SHL5plus XD I think you’ll have the pleasure of receiving many healthy musical banquets served on a wide luxurious soundstage. Each dish (a.k.a. instrument/sound) is in its right place, all basked in the acoustic equivalent of a bright sunny day. Lastly, I don’t think you’ll be in any hurry for a long time to look for a replacement for these speakers, either acoustically or aesthetically. In many aspects, they are truly timeless.