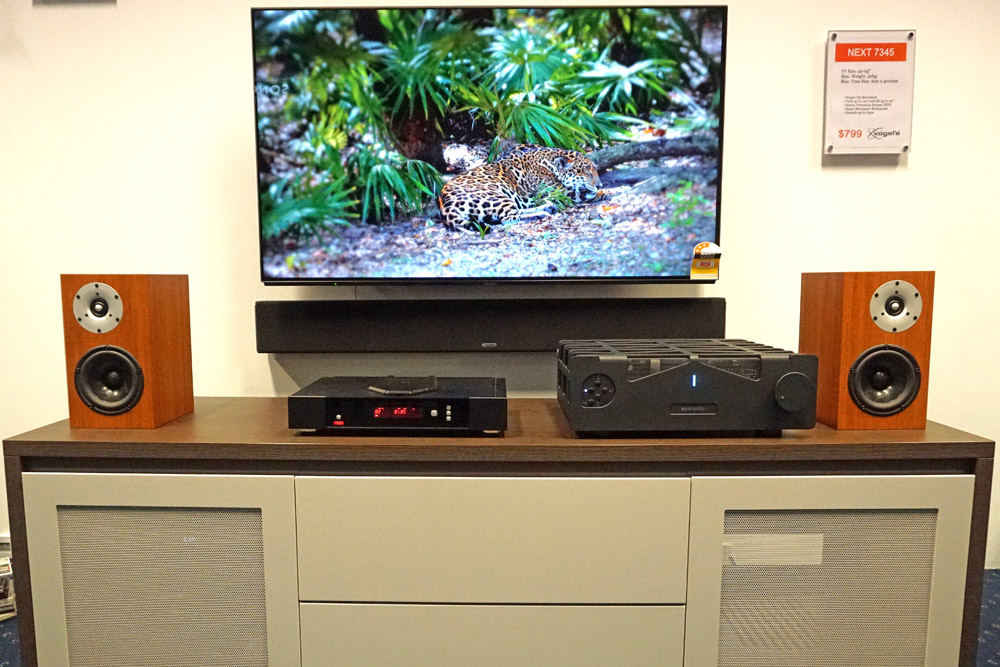 Bricks and mortar Hi-Fi stores, and the personalised customer service and experience they bring, are increasingly under threat from direct from manufacturer sales, ‘net only marketers and lounge room ‘distributors’ who often have neither the resources nor the know-how to support either the customer or the product. The latter might be big on Facebook but when it comes to crucial issues like component selection, system matching, installation, and tuning, the value of an ongoing face to face relationship for the consumer (and for the manufacturer too) cannot be overestimated. This was ably demonstrated at an event held by Sturmans AV in Wollongong recently.

Hosted by Mike Sturman, the aim of the event was to take attendees on a process of discovery and education through open discussion and demonstration of some of the ways a Hi-Fi system can be progressively set up and tuned to achieve the best seat in the house at home. Apparently, the idea came from Mike demonstrating incremental levels of system improvement to his daughter’s school friends and he was surprised to learn not only how enjoyable the children found the experience but also how readily they appreciated and could articulate the differences they heard. You’d expect a good retailer to know his product, and how to get the best out of it. But for Sturman, product understanding and system optimisation has been an ongoing 30-year-long-game quest. What’s more, a different sound does not necessarily mean a better sound. As Mike asked the packed room following a successive change to the test system: “Each treatment will have a different effect on the music. The most important thing is, do you want to keep listening and why?” 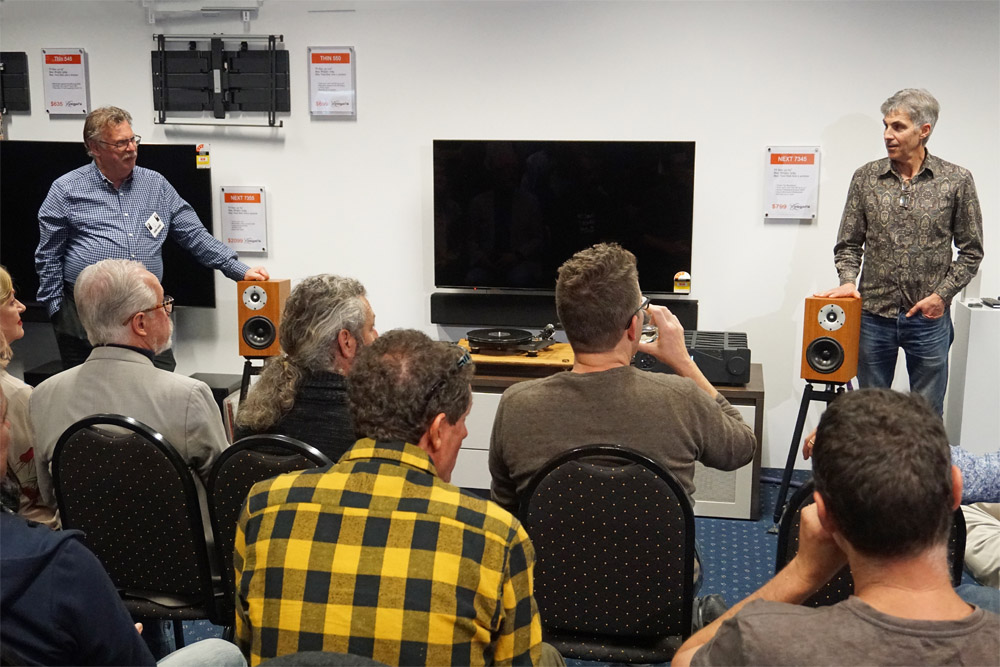 Helping Mike Sturman explore answers to his questions in the theoretical and practical sense were (‘Sir’) Les Davis of Les Davis Audio tuning products and Brad Serhan and Morris Swift of Serhan + Swift loudspeakers. This audio supergroup, in its trademark paisley shirts, has surely become the veritable Travelling Wilburys of the Australian Hi-Fi scene. The very special guest for the evening was the thoughtful and articulate Gary Morrison of the superb Pure Audio amplifier line, “on tour” from New Zealand to round out the ANZAC aural alliance.

The attendees themselves also made the night special. They were noticeably receptive and offered many insightful, interactive contributions. The vibes throughout the evening were warm and engaging. Les Davis’s musical selections were live recordings from Deep Purple to the Decemberists, intentionally chosen to exhibit the capacity of the system to recreate the best seat in the house in varying acoustic spaces. Not a soul left early. Clearly, there is a lot of trust and respect in Sturmans AV and its staff. 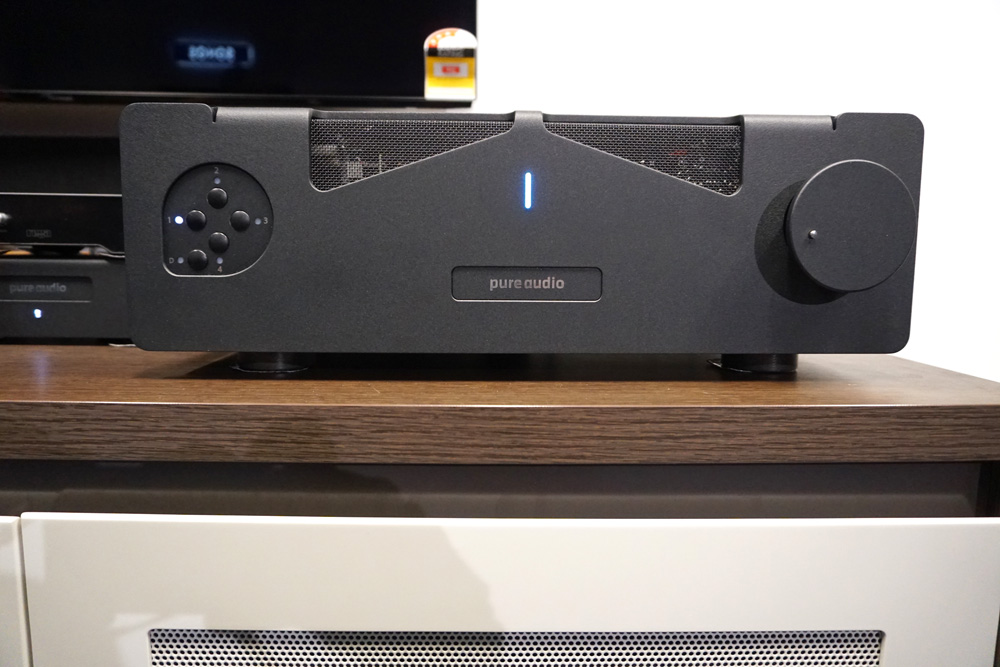 The demonstration system featured the sensational Brigadier Mu 2 loudspeakers (in upgraded SE guise) driven by the equally impressive Pure Audio One integrated amplifier. This is a genuine Class-A dual mono 100 watt tour de force which boasts a fully regulated power supply to boot that is rare at any price. Also in play was the Rega Saturn CD spinner and later the new Rega 8 turntable kindly loaned by Jack Sarkissian and Phil Sawyer of Synergy Audio Visual to showcase the neat and compact, surprisingly affordable new Pure Audio LV-1 Phono Preamplifier. Some might argue that an analogue set up still remains a most significant improvement to any system…

At the start of the evening, the system was set up on a credenza as you might find in a typical home context with no speaker stands or other audiophile accoutrements such as power cords and the like. Notwithstanding, it sounded surprisingly decent which is a testament to the innate quality of the products on offer. The system was incrementally  improved by adding dedicated speaker stands from Solidsteel, expert placement, power management and filtration products from Isotek and, most obviously, Les Davis’ remarkable tuning material which, when cannily applied to various key sites, has the knack of tying the whole system together with a major jump in organic flow, separation, and listener involvement.

This is the sort of demonstration event which suits our Les to a tee. Every added Les Davis Audio treatment had an obvious beneficial effect, working not just to control micro vibration but also to appreciably lower the noise floor of the system. Les gave the recently introduced Vibrare Firmata power board mats a serious workout as well as prototype cable wraps which brought back memories of the Original Kable Jacket. A-B-A “can you do that one more time, wow!” comparisons left the attendees in no doubt as to the obvious usefulness of Les Davis Audio treatments in getting the best out of a home audio system. One notable area of improvement, in particular, was in the performance of the CD player which was clearly more open and relaxed following its treatment with Les Davis Audio material. As Les told me: “There is no doubt that current and associated issues such as RF interference causes digital audio to not correctly assemble the analogue conversion. It is almost as if the digital processing is having an issue with its nervous system.” 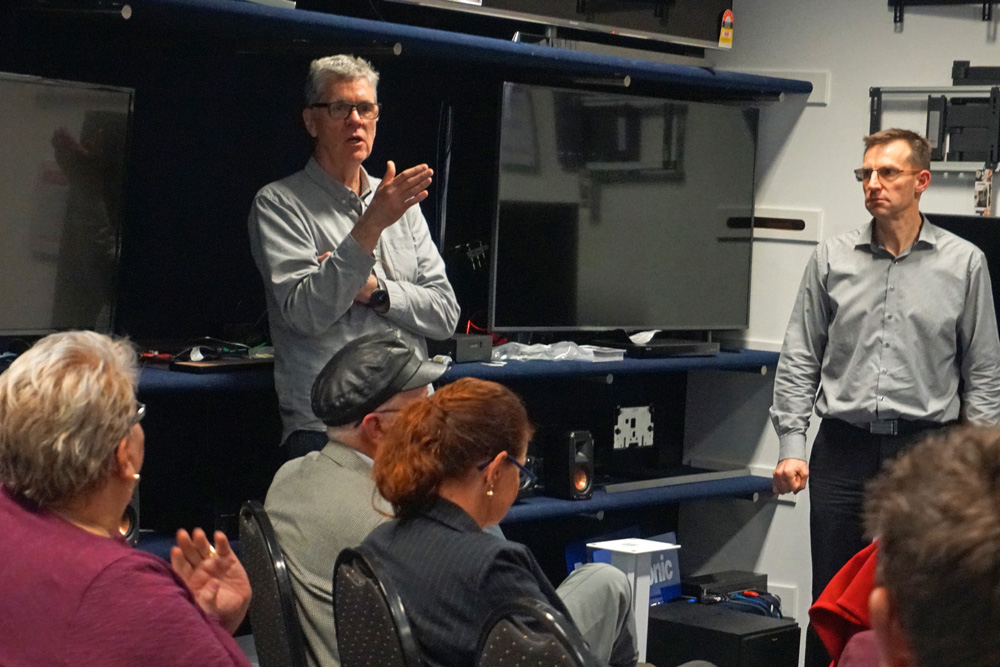 Then, it was good to hear from the fiercely erudite Morris Swift who focused on the engineering principles and design choices behind the Brigadier Mu 2 point source 2-ways. Once again the emphasis was on how the design gets you “more music and less noise” as he put it or “less distortion and distraction” as Brad Serhan described it. Every time I get to hear the Mu 2s, I marvel at their superior transparency and resolving power. Morris attributed this to the noticeable phase coherence and seamless driver integration of the speaker, as well as to the minimisation of timing errors in the crossover design leading to a huge sound field with excellent off-axis tonal integrity. Cue up Johnny Cash Live at Folsom Prison and get a palpably real sense of the physical space of the recording from the reproduction of the real-time timing cues in the distinct acoustic space.

Finally, it was left to Gary Morrison to bring it all home by discussing his amazing Pure Audio One integrated amplifier and how it “integrates” so effectively and so very sweetly. Gary spoke for over half an hour but it felt like five minutes. The Pure Audio One has tone to burn, rapturous fire-glow tonal beauty and ‘touch me’ 3D imaging. But it’s also the kind of low noise transparency, differentiation, dynamic authority and clout even a killer 300B tube amp can only dream about. The striking good looks of the chassis design are at once pure architecture and pure engineering genius. Hot sand amp tramp, I wanted to take you home immediately. 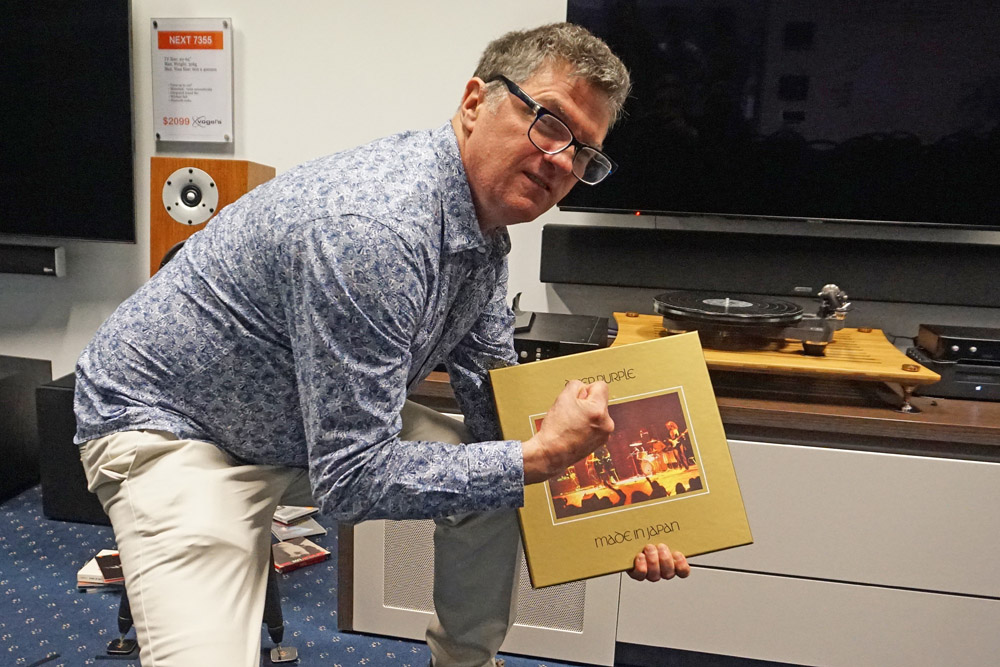 Gary offered some great insight into how his amplifier design gets the best out of the musical signal:

If you’ve got a musical signal, if you’ve got an instrument that tries to make a pure tone, it’s never a pure tone. It’s a tone with harmonics. So, when you put a signal through an amplifier the ideal is that, as it goes through, it’s untouched by the electronics. It comes out the other end exactly the same as it goes in. But in reality there’s always a very small amount of distortion in the product. It might be infinitesimally small but it’s there. And so, if you look at the signal coming out it’s going to have some added harmonics, at a very low level. I think that the order and the amplitude and the way they fall away, the relationship between the harmonics is one of the factors that makes one amplifier sound different from another. I don’t design specifically to produce a certain type of distortion but I do use a circuit that has a particular characteristic that seems to sound good. It’s a development of a circuit I was using when I was at Plinius but it’s been taken a long, long way beyond that.

Amongst other things, Pure Audio gets you the best seat in the house musically because:

There are other factors as well like the power supply design in the amplifier. This ability to produce this huge sound field. Morris was talking about timing, I think another factor in that is the intricate, detailed relationship between the amplitude and phase of all the components of a musical signal. So, if you’ve got all that information encoded in the signal and you can reproduce it and maintain all the phase relationships and all the tiny amplitude relationships you will get the reproduction of an acoustic environment. If you don’t reproduce all of those things you’ll get a sound that is flat and less real. 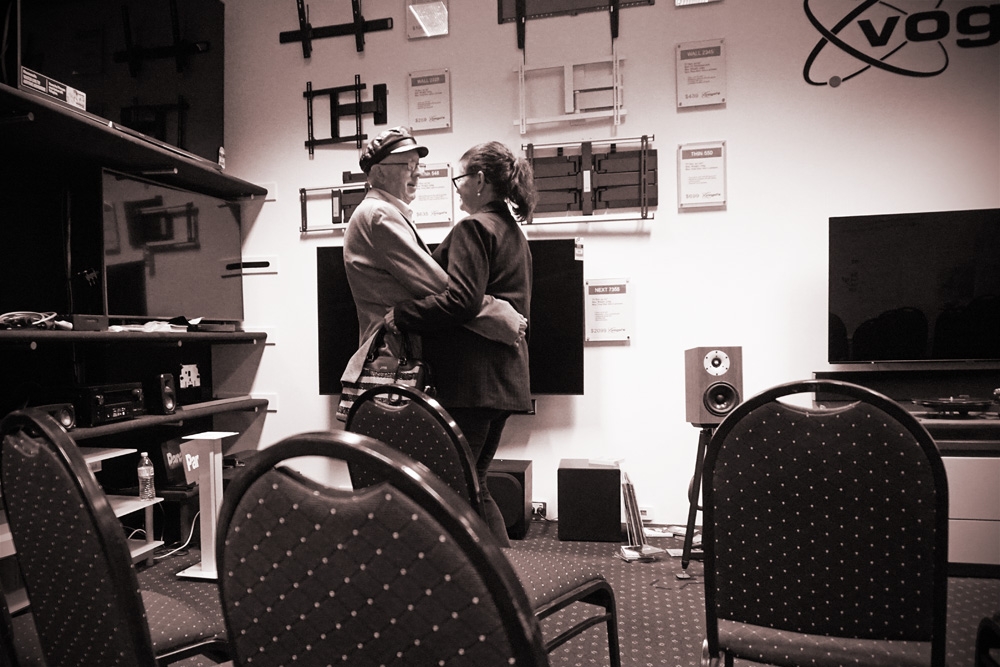 Late into the evening, as Ian Gillan bellowed “Strange Kind of Woman”, and a sense of the Lake Geneva shoreline was being rendered with uncommon clarity, focus, and inner detail, a couple got up, joined hands, and danced their way lovingly out of the store. It was the ultimate warm expression of the evening’s successful joint venture between retailer, manufacturer and consumer. When Ritchie Blackmore cranked that Strat into shredding overdrive, it was patently obvious Sturmans AV had afforded me the best seat in the house on that magical night. As well as the listener beside me, and in front of me, and behind me. We need more nights like these “Made in Wollongong”.